How to Make a Stuffed Pork Loin

Have you always loved the look of a rolled pork loin roast but weren’t sure how to make one? Do you love pork, ham, salami, and gooey cheese? If you answered “yes” to either of these questions, this article is for you. You’ll learn how to butterfly, stuff, and roll the pork roast of your dreams. 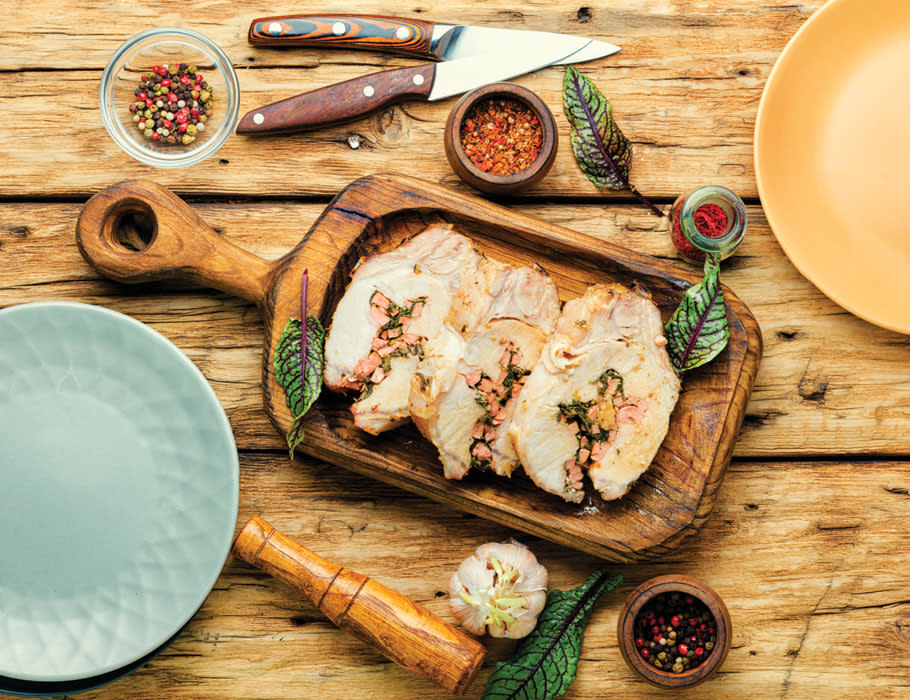 STUFFED PORK LOIN ROASTS ARE IMPRESSIVE, but they may be intimidating — it’s a process. Let us allay any fear or intimidation you may be feeling by breaking down the process for you to make it seem less daunting.

You’ll start with a standard pork loin roast, which has a layer of silverskin under the fat cap. Silverskin gets tough and is difficult to chew if left on, so remove it.

Next, you need to butterfly the roast and pound it so it’s uniformly thin. You’ll essentially cut the roast nearly in half, then cut the two halves nearly in half which helps the pork lay out flat. Then pound the butterflied roast to even out any thick portions.

Stuffing the pork is next. Just lay the fillings on top, roll it up like a jelly roll, then tie the roast to secure it. The rest is pretty standard — sear three sides on the stovetop and finish roasting it in the oven. This is when the magic happens.

As the pork roasts, the fillings heat up and cheese starts to leak out the sides and turn crispy on the grill pan. This is one of the best parts about this roast...eating the gooey, crispy cheese from the bottom of the pan while the pork is resting. Here in the Test Kitchen we call that a Scooby snack!

How to Trim Silverskin 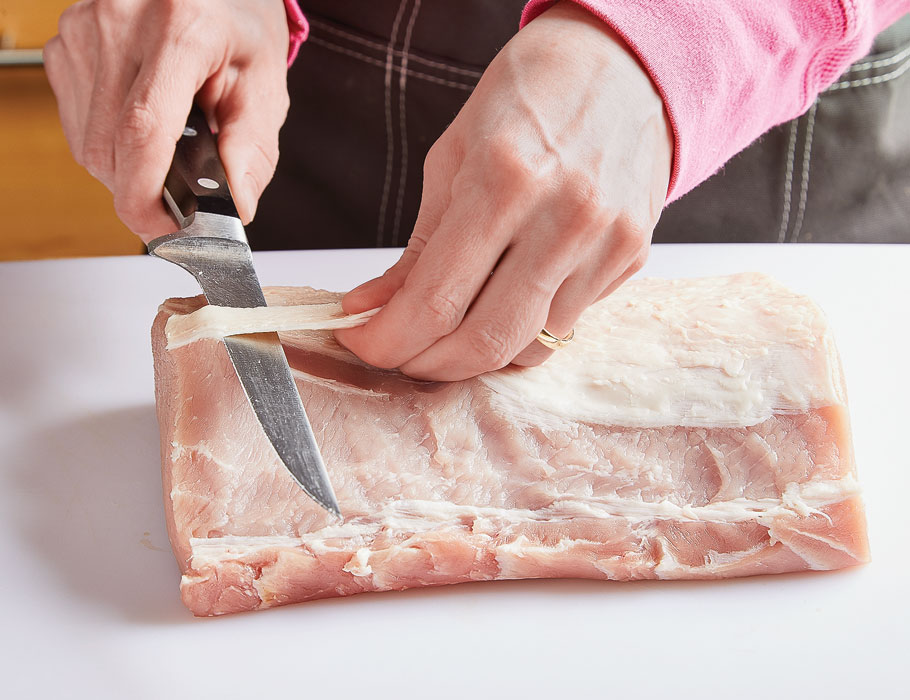 A thick layer of silverskin lies beneath the fat on the roast. Slide the tip of a boning knife just under a portion of the silverskin. Then, with the knife angled upwards (towards the silverskin) slide the knife along the length of it to remove. Grab the loose flap of silverskin in your hand, and holding the knife in the other direction, slide it along until the entire strip has been removed. Continue with this process until all the silverskin is gone. You can watch our video on How to Remove Silverskin.

How to Butterfly a Pork Loin 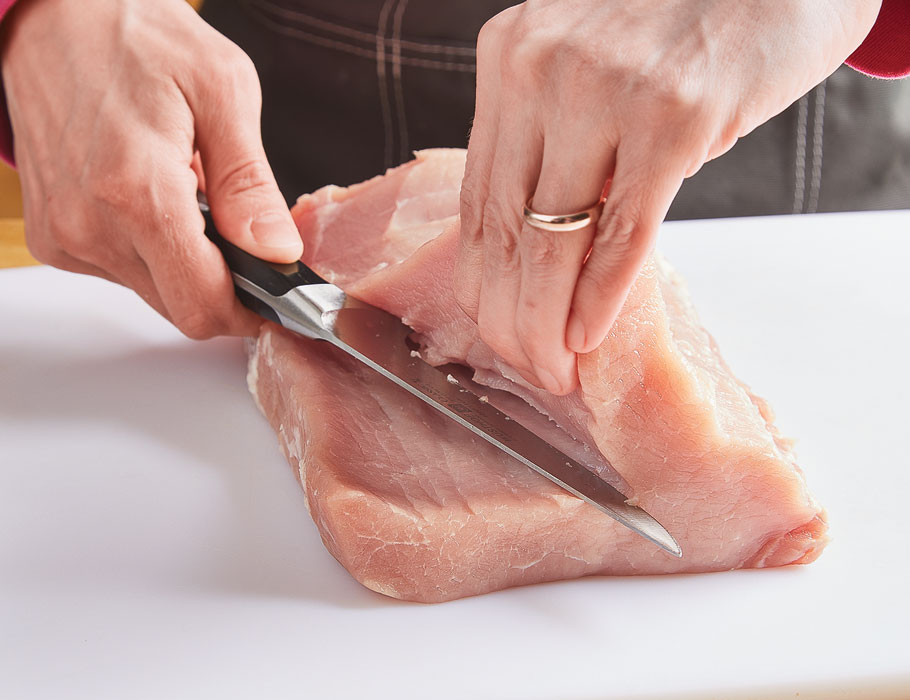 With boning knife parallel to the cutting board, slice pork nearly in half, starting from the side, then open the roast like two halves of a book. 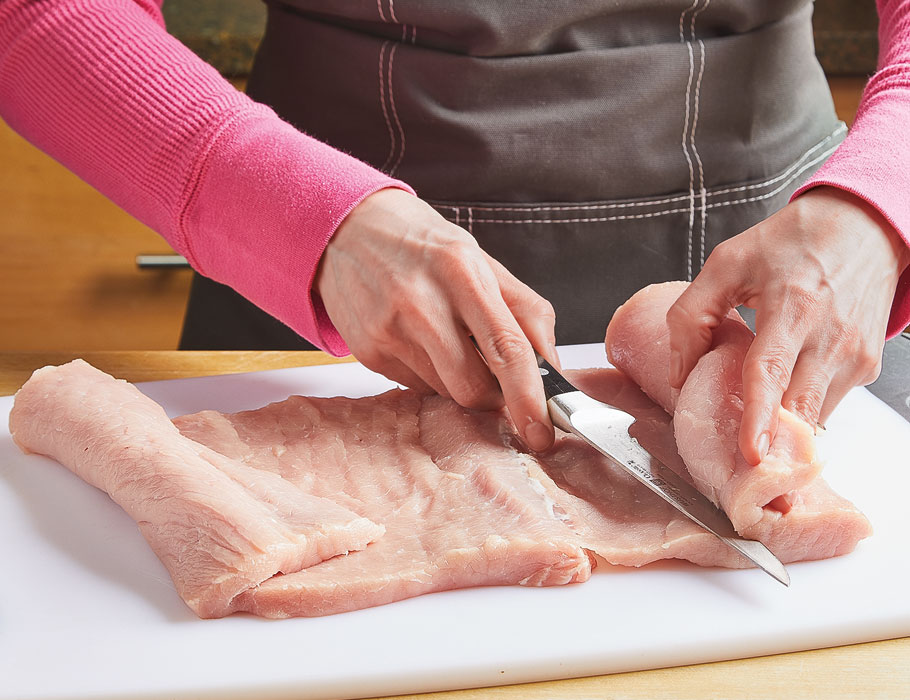 Starting from the center, cut each side nearly in half, and open each half like a book. Take your time. Try to keep the thickness even. 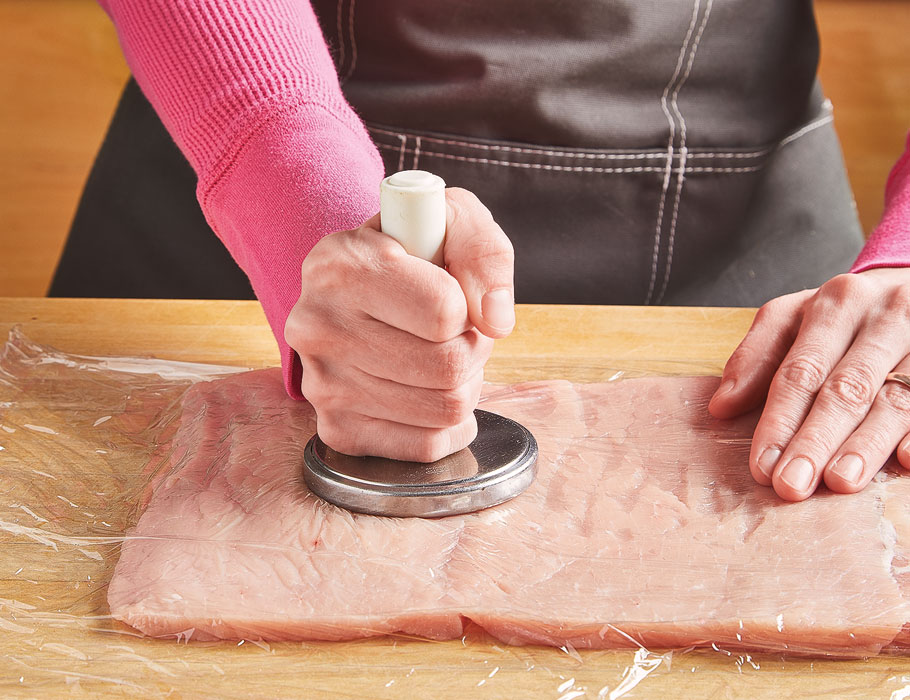 Use a meat mallet to pound any thick portions of the butterflied pork, that way it cooks most evenly.

Watch the full video on How to Butterfly a Pork Loin here.

How to Layer & Roll Up a Stuffed Pork Loin 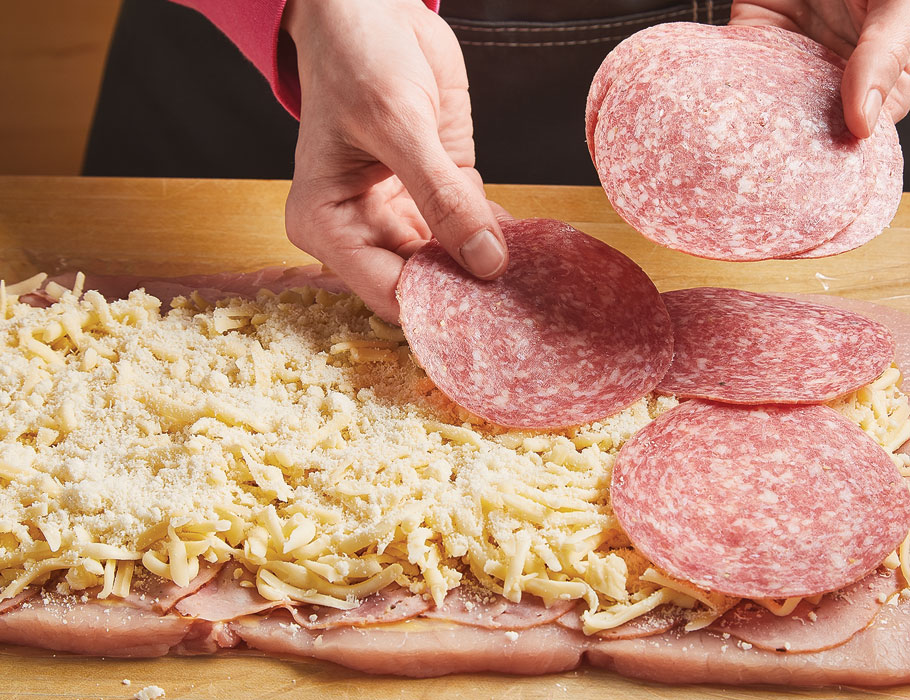 For even cooking and distribution of flavor, evenly layer the fillings on the butterflied pork. To keep the fillings securely inside, leave a ½-inch border around the roast. 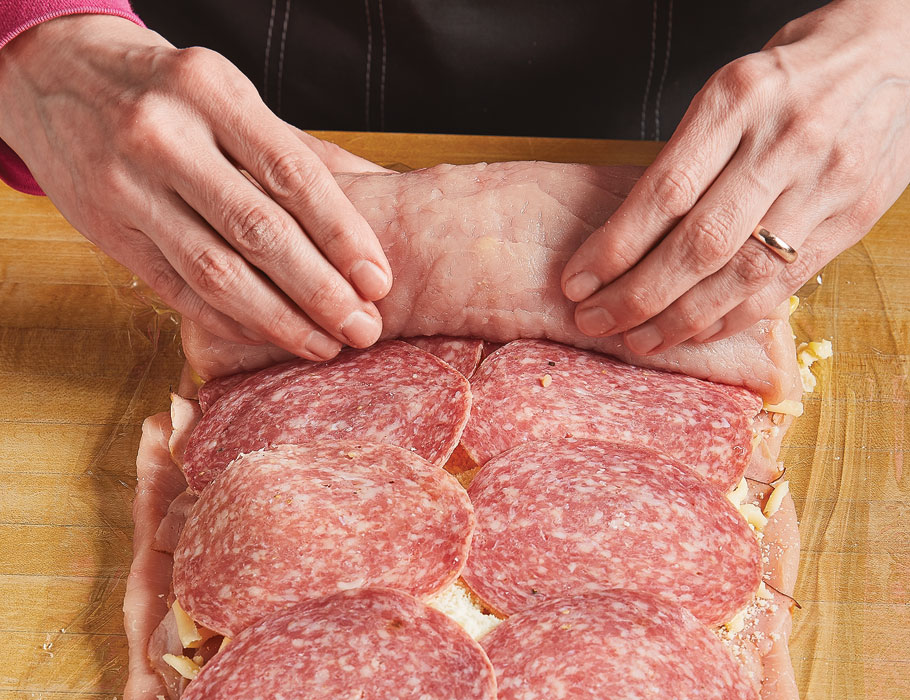 To roll the roast as tightly as possible, gently pull back on it as you roll it from a short side. Use your fingers to help hold in the fillings while rolling, if necessary.

How to Tie a Roast 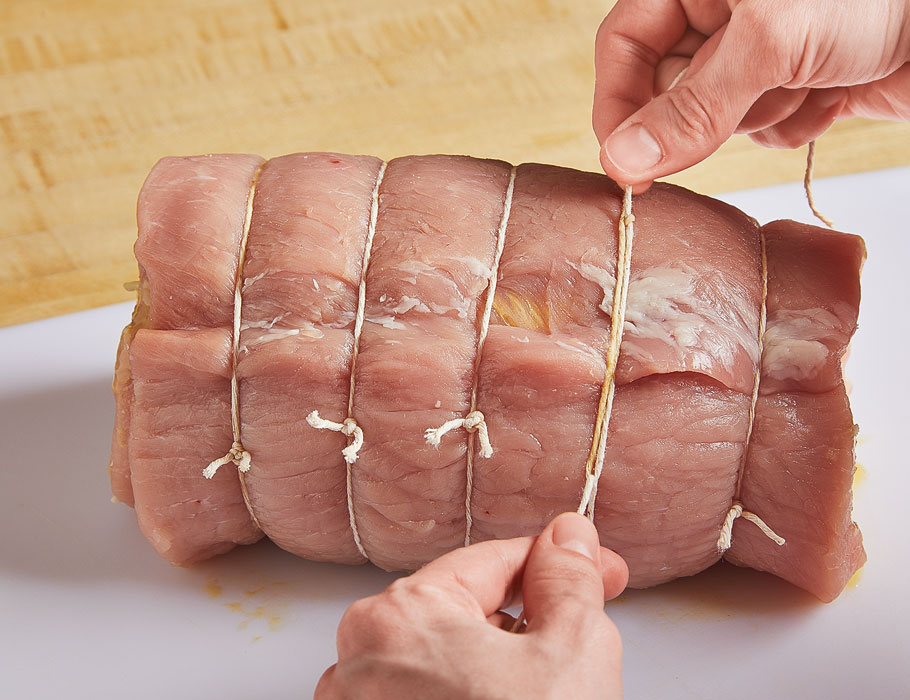 Tying the roast is pretty simple. Start by tying it with kitchen twine, crosswise, in the center, then alternate sides, tying in 1-inch intervals. Then, to secure the ends, tie the roast lengthwise, twice. Kitchen string should form an “×” on the ends.

*We found the best way to tie the roast was to secure it with slip knots, but it won’t make or break this recipe. If you want to learn how to do it, check out our video. 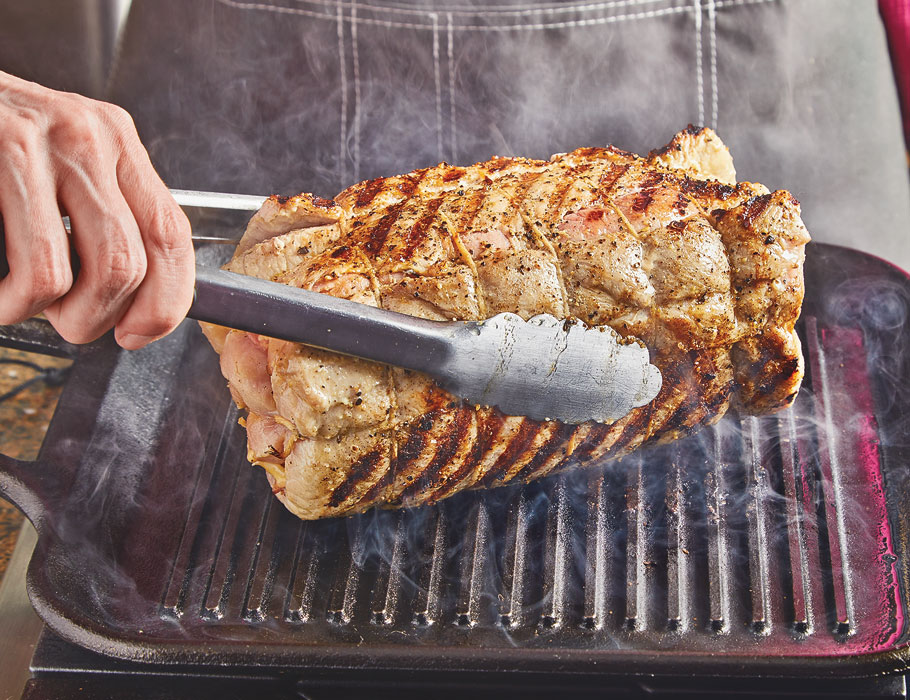 Sear three sides of the roast for the best flavor and presentation, turning the roast with long tongs to protect your hands. We like to use a cast-iron gri Then rto get those beautiful grill marks. otate the roast to the fourth side, transfer to the oven, and finish cooking it. 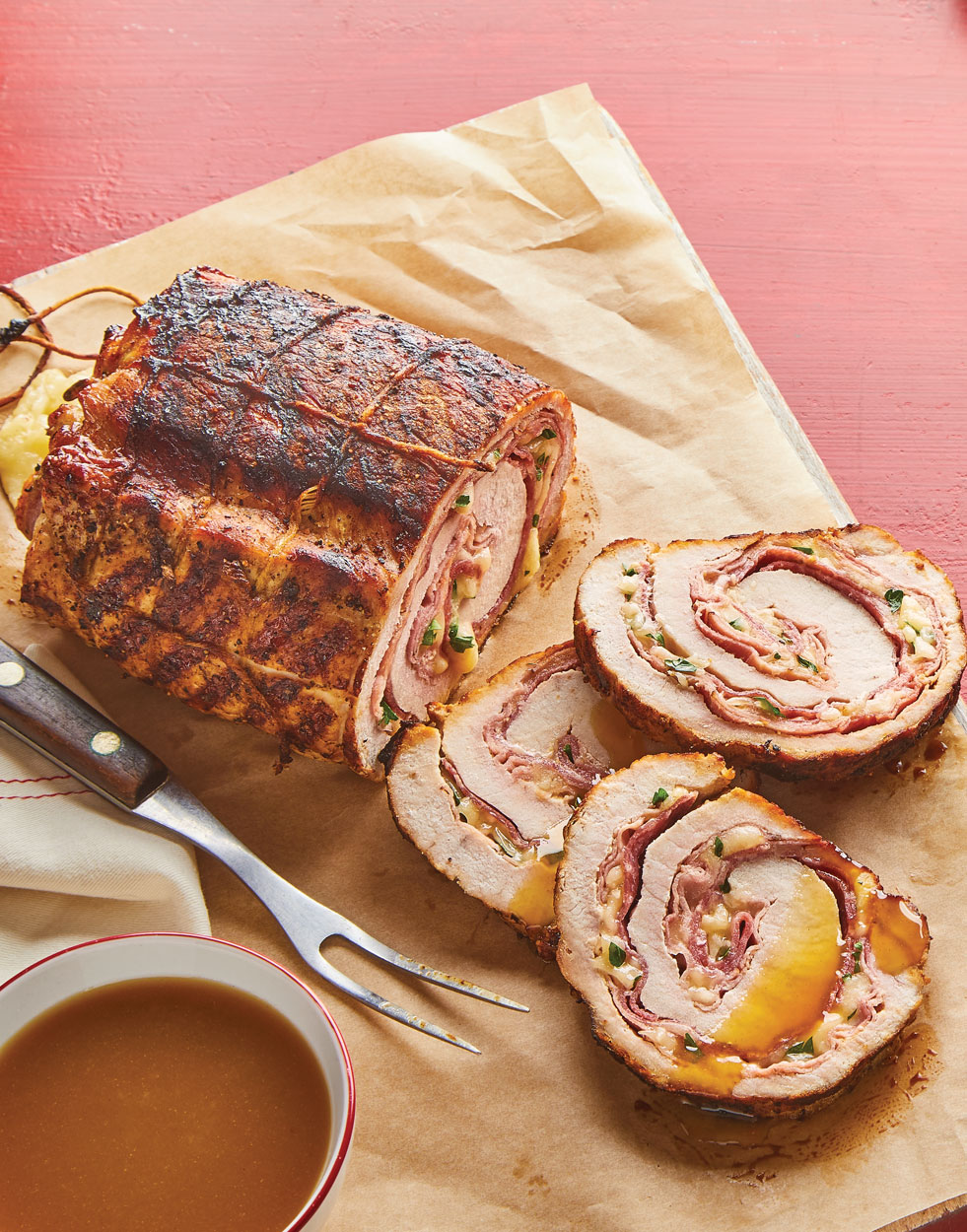 Get the recipe for Three Little Pigs Roast here.