How to Make Homemade Pastrami

Making Homemade Pastrami isn’t a weeknight project, but once you try your hand at making this highly coveted deli staple, you’ll fall head over heels for its succulent slices. So grab our recipe for Homemade Pastrami and follow along. 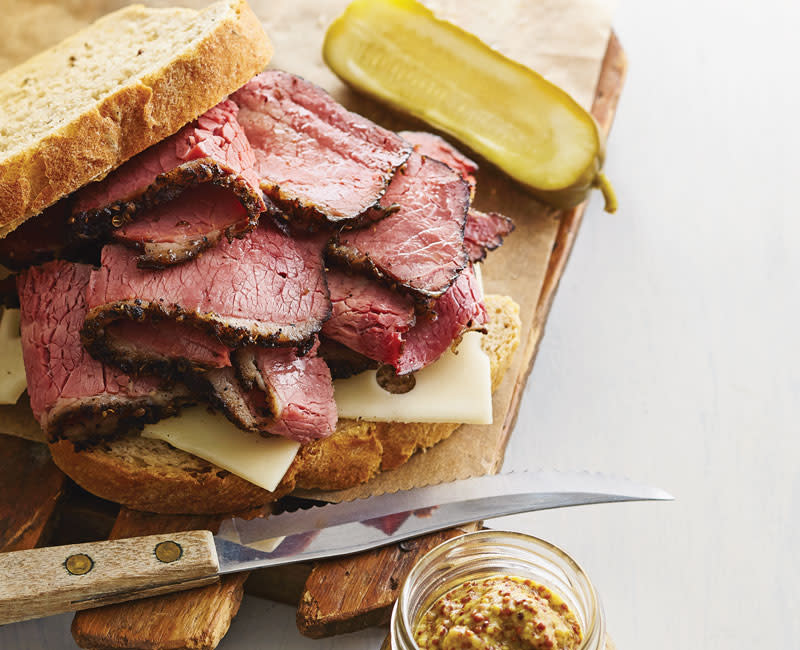 Pastrami is traditionally found in Jewish delis. You’ve probably had it, but do you really know what it is? A cousin to corned beef, pastrami is made by using a 3-step process of brining, smoking, and steaming a piece of brisket, and it’s absolutely fantastic. The first step, brining, keeps the meat moist, adds the first layer of flavor, and protects the meat from spoilage. And after it’s brined, rub the meat with a spice blend for the second layer of flavor. For authentic pastrami, black peppercorns and coriander seeds are a must, and grinding your own lends the boldest, freshest flavor. The second step, smoking, adds the final layer of flavor. Other than mesquite, which can overpower the meat, choose your favoritetype of wood. Pecan and hickory woods yielded equally delicious results. The third step to creating the pastrami of your dreams is steaming. You’ll want to do it in a low-heat oven to keep the meat from drying out and to break down its tough connective tissues. Whether you serve the juicy slices of pastrami spartanstyle — with just mustard between two slices of rye bread — or you doll it up a bit more,you’re sure to fall in love. 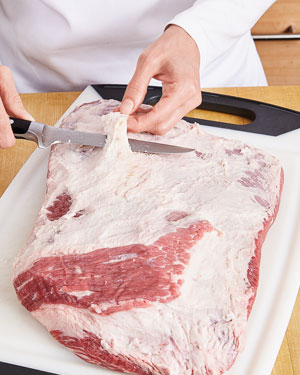 Since the fat makes it harder for the brine to thoroughly penetrate the meat, trim it to within ⅛–¼-inch. Don’t trim off all the fat, though. It keeps the meat moist. 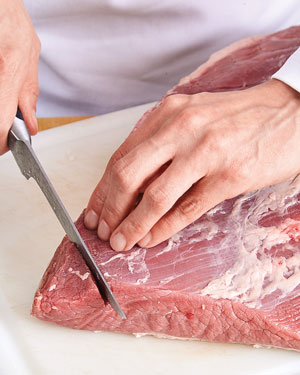 Smoking makes it hard to see the grain of the meat. Cut off a small piece, perpendicular to the grain, before brining so you have a sense of where the grain is after smoking. 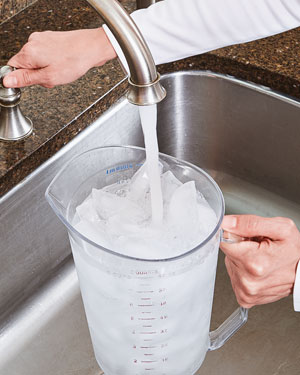 For the correct amount of water in the brine, measure out 8 cups ice first, then fill the measuring cup with water to the 8-cup mark. 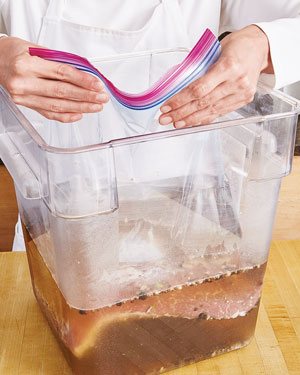 The simplest way to ensure the brisket is fully submerged in the brine is to weigh it down with a sealed plastic bag full of water.

If the brine isn’t below 40 degrees after adding the ice and water, chill it until it is. For food safety measures, never add meat to a warm brine. 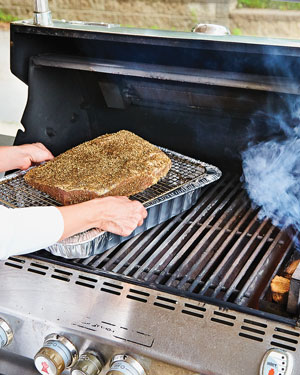 So they don’t fizzle out before they get going, be sure the wood chunks are really smoking before reducing the heat under them, shutting off the other burners, and placing the brisket on the grill. 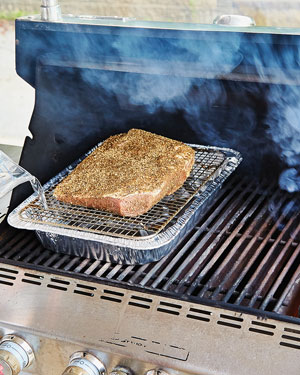 To prevent heat levels from rising inside the grill, pour water into the pan under the brisket. If temps rise, check the wood chunks. If they’re flaming, rather than smoking, liberally spritz them with water. This produces more smoke and drops the temperature. 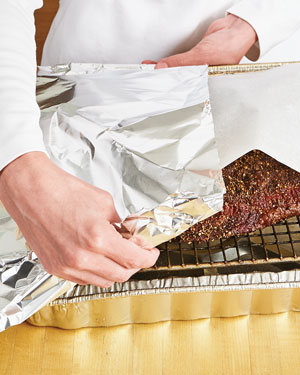 So the connective tissues in the pastrami break down, tightly wrap it with foil to trap steam inside the pan. But, first cover the pastrami with a layer of parchment paper. This is to protect it from a chemical reaction known as “lasagna cell” that can melt the foil.

Smoking Know-How To maintain constant smoke, you’ll need to add fresh wood chunks as the previous ones burn away. To get the new chunks to burn, you may need to increase the heat under them. In that case, leave the lid open until the chunks start producing smoke, then reduce the heat, and close the lid.

Skip a Day If you have time to smoke and steam the pastrami on the same day, after smoking, simply cover it with parchment paper, wrap tightly with heavy-duty foil, then steam the pastrami according to recipe directions. Steaming ensures the tough connective tissues have broken down and melted away.