All About Asparagus: Growing, Buying, Storing, and Cooking With Spring's First Veggie

Although it's now available year-round, asparagus is one of the first fresh vegetables you’ll see in the spring. Here's everything you need to know about asparagus, from how to grow and buy it, to storing and prepping tips, and some of our favorite asparagus recipes. 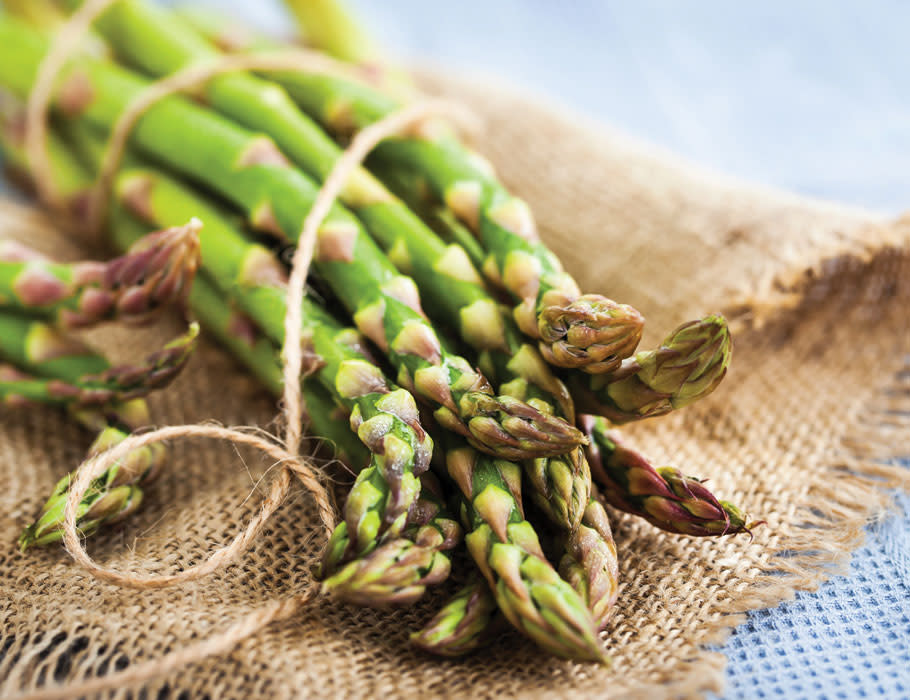 No vegetable harkens the arrival of spring better than green spring asparagus. It’s one of the first vegetables to arrive in grocery stores and farmers’ markets after the chill of winter is gone. While it’s becoming more widely available year-round, there’s nothing like the sweet, fresh flavor of asparagus in the heart of spring.

Asparagus are the above-ground plant shoots of an underground perennial crown. Asparagus, like onions, leeks, and garlic, has membership in the lily family. They would turn into a huge, fern-like plant if the spears were not harvested. The word “shoot” describes their growing habits — they can grow up to 10” a day during their 6 to 7 week growing period each spring. The spears will continue to grow even after they’re harvested. Low in calories and sodium, they are a good source of fiber, vitamin B6, calcium, magnesium, and zinc, as well as many other vitamins. Little known fact: one-quarter pound of asparagus also has about 3 grams of protein!

Thick vs. Thin Asparagus — Which is better?

It’s more of a personal choice, but thin asparagus is much more susceptible to overcooking, turning it flimsy and mushy. Thick asparagus can withstand high-heat applications much better, providing the ability for caramelization and a crisp-tender, meaty texture. Choose a thickness based on what you like to eat and the recipe/cooking method. Thick asparagus is great for roasting, grilling and sautéing, while thinner asparagus is great for applications where it will be puréed, stir-fried or eaten raw. Because thin asparagus is more fragile and delicate, it doesn’t hold up to long-storing, either on grocery store shelves or at home, as well as the thicker spears. The thickness of a spear has nothing to do with its age or freshness-instead, the diameter is determined by the variety of asparagus and the age of the plant, with younger plants producing thinner stalks.

Asparagus is available in three colors: white, purple and green. White asparagus is covered with soil as it grows, so it’s never exposed to sunlight, prohibiting photosynthesis and giving chlorophyll no chance to activate. It’s an expensive spring delicacy in French cooking, but harder to find in the U.S. High-quality white asparagus has stalks that are very thick with a deep flavor and meaty texture, but substandard white asparagus is often thin and woody, with none of the sweet asparagus flavor we’re used to. Unless you can find very high-quality white asparagus (or grow it yourself), it might be better to stick to the standard green. Purple asparagus is beautiful to look at, but turns green when cooked and tastes the same as green asparagus. For raw or barely cooked applications, it may be worth seeking out for a beautiful presentation. Green asparagus is widely available, with a sweet, grassy flavor. 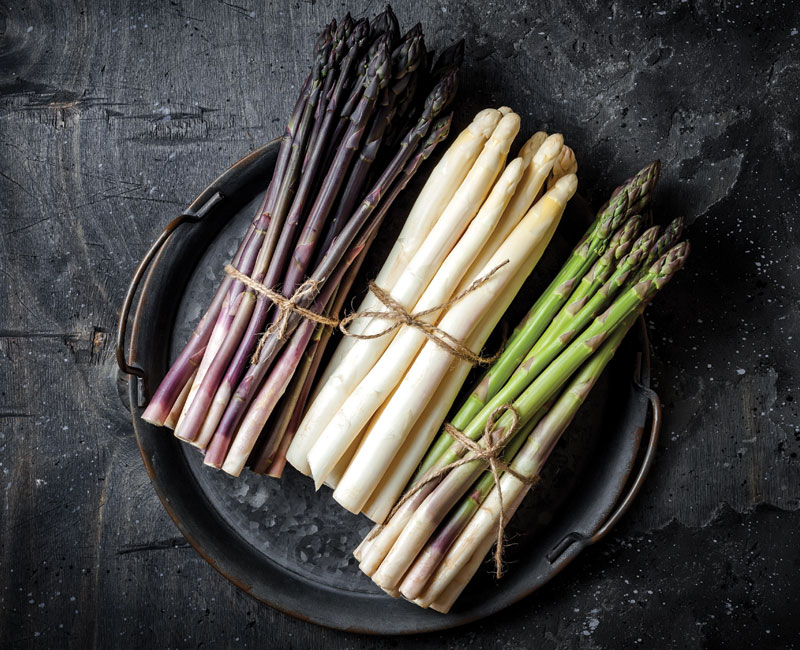 How to Grow Asparagus

Asparagus thrives in areas where the winter ground freezes or where the climate is dry. In fact, Florida and areas around the Gulf Coast are some of the only places in the United States where asparagus is hard to grow! Starting asparagus from young crowns will jump-start your growing ability better than starting from seed. You can often buy these at farmers’ markets and some garden centers. Plants take about 3 years to fully fill in, establish their root system and start producing edible stalks, but they can yield asparagus for up to 20 years! Plant asparagus in areas with full-sun and plenty of room between plants (the root system will spread out significantly underground). Work in plenty of organic matter into the soil and make sure to regularly water your plants! Asparagus grows best when the daytime temperature is between 70 and 85 degrees and nighttime temperatures are between 60 and 70 degrees. Shoots will begin growing when the soil temperature reaches 50 degrees. The perfect springtime vegetable!

How to Buy Asparagus

Look for asparagus with tightly closed tops and with spears about the same size in diameter so they’ll cook evenly. Avoid spears with bases that appear woody, cracked or dried out; the bottom should still look moist and light green. Also avoid spears that look slimy.

How to Store Asparagus

You can store the asparagus in the refrigerator, either in a paper bag to wick off moisture, or in a glass or jar filled with about 1 inch of water. Undo the bunches of asparagus so each stalk has a little room to breathe. 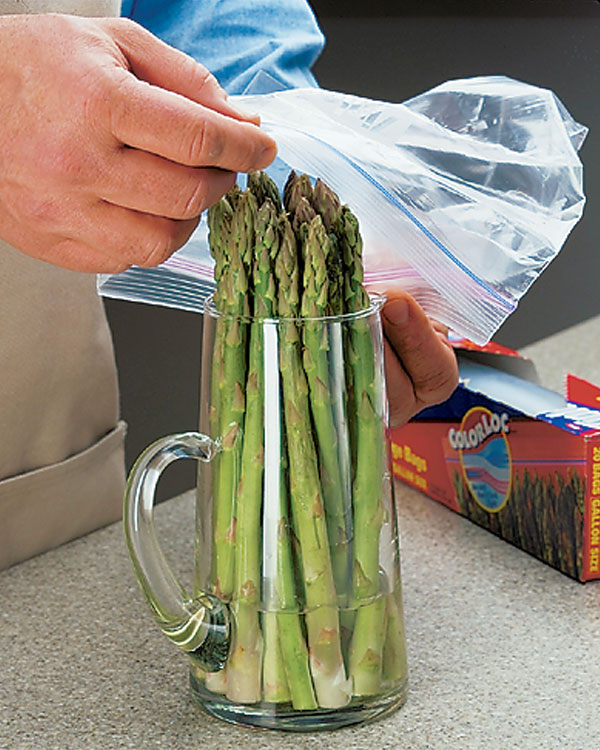 TIP: How to Store Asparagus

How to Prepare Asparagus

Regardless of the thickness of the stalks, it’s always a good idea to snap off the tough, woody ends of the stalks. Simply hold a spear at the bottom and in the middle, and bend it until it snaps. You can do this with your entire bunch, or use the snapped one as a guide to cut the rest of the bundle. Place the snapped stalk next to the rest of the asparagus, lining the tips up so they are even. Use a sharp knife to cut the woody ends off the remaining untrimmed asparagus to match the length of the snapped stalk. Snapping is fun and definitely ensures a tender vegetable without the woody stem, but can be a bit wasteful as you will lose more asparagus if you snap off the bottom portion at its natural breaking point. Alternatively, you can use a sharp knife to trim off the bottom one inch of the stalks. Proceed with peeling the asparagus as outlined below. 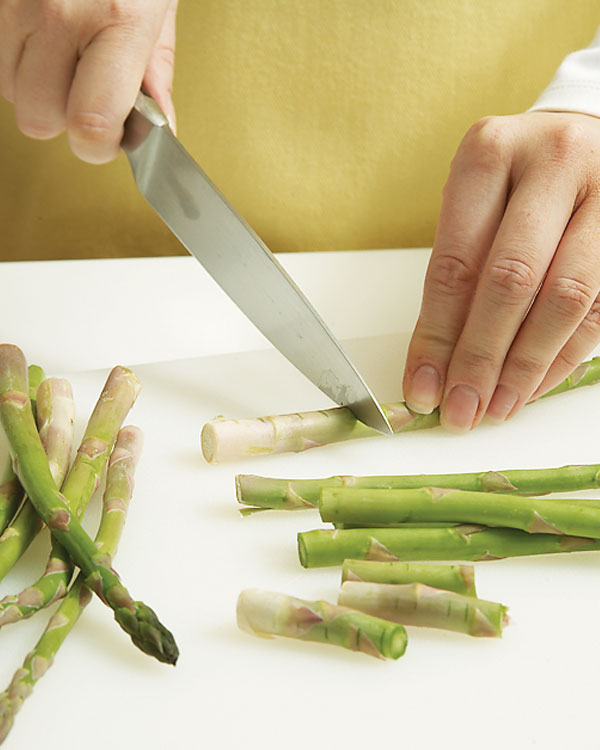 TIP: How to Trim Asparagus 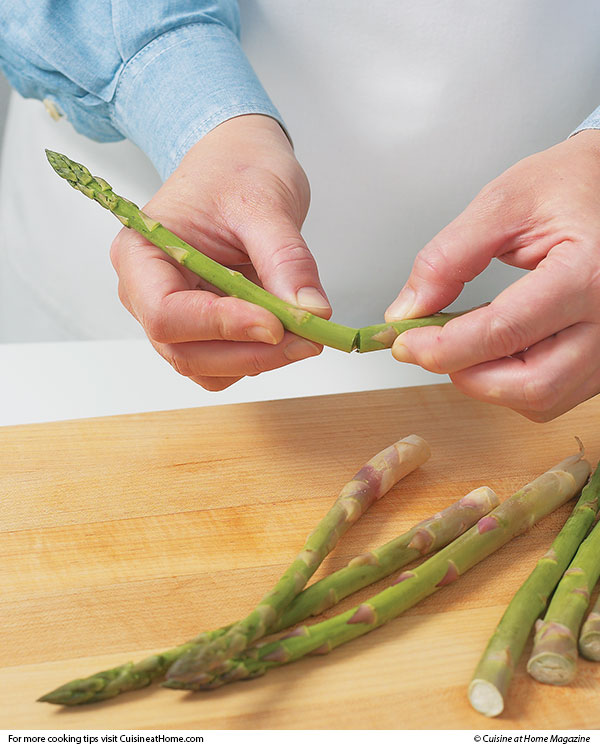 TIP: How to Prepare Asparagus

Thin spears only need a quick trim of the base of the stalk, but thick spears may be a little woodier around the stem and base. After trimming, use a vegetable peeler to peel the base of the asparagus; start about halfway down the stem and peel off the outer skin to remove the stringy fibers.

How to Cook Asparagus

Asparagus is typically served as a vegetable side dish, or a component of a main dish. It takes particularly well to blanching, grilling, roasting, simmering, steaming and stir-frying. It can also be eaten raw, very thinly sliced on the bias, in salads. You can also pickle and can asparagus to preserve it for out-of-season months.

Like most fresh vegetables, less is more when it comes to cooking. The final texture should be crisp-tender, with an army green color. There should be no mushy or shriveled asparagus on your table!

The Elephant in the (Bath)room

Asparagus contains asparagusic acid which, when digested and broken down, turns into a sulfur-containing compound. As with many other substances that contain sulfur, these compounds can give off a powerful, distinct scent. What’s more is that these compounds are volatile, meaning they enter a gaseous state at room temperature, making them detectable by your nose. These factors are what makes your urine smell after you eat asparagus. But the real doozy is, not everyone produces or can detect this smell. This difference seems to have something to do with genetics, but the jury’s still out on just what distinguishes someone who can detect the scent and someone who can’t.

Some of Our Favorite Asparagus Recipes