Artichokes are strikingly flower-like with an olive green and sometimes purple color which makes them stand out among other vegetables in the produce section. They may look intimidating, but they’re very easy to cook. Here's how to prep and cook artichokes. 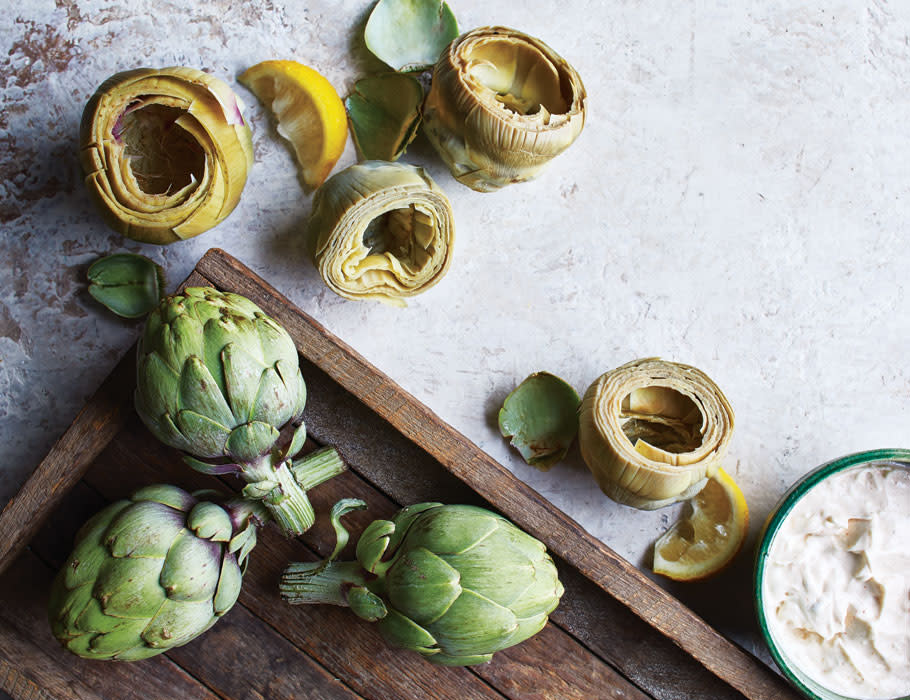 An artichoke is a very unique looking vegetable that really comes to life once cooked. How anyone ever discovered this is a conundrum. It’s considered a perennial thistle, characterized by prickly petals, and only parts of the artichoke can be consumed. The outside of the artichoke bulb features green petals, which, for the most part, are stringy, fibrous, and not ideal to eat. The edible portion is at the bottom of the petals, where there’s a tiny bit of soft flesh. The outermost layers tend to be the toughest — the leaves get softer as you get closer to the center. Once you reach the center, it’s necessary to remove the inedible choke to enjoy the best part of the artichoke — the tender heart. 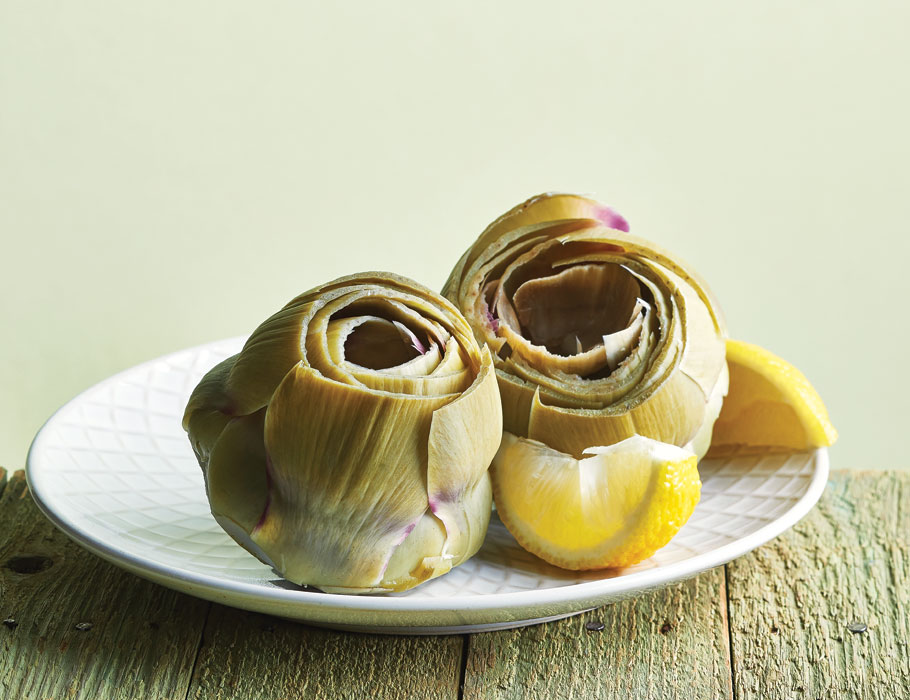 A member of the sunflower family, artichokes are low in fat and loaded with nutritional benefits, such as fiber, vitamin C, vitamin K (essential for building strong bones and preventing heart disease), folate, calcium, iron, and potassium. Clearly artichokes are an important ingredient to consider adding to your routine as part of a healthy diet.

Most of the artichokes in the United States are grown in Castroville, California. Once plucked and shipped to the produce aisle, these “globes” will keep in airtight containers in the fridge, but plan to use them within a few days. Baby artichokes are entirely edible, unlike their full-grown counterparts. These mature buds grow low on the stalk out of the sun, keeping them choke-free and tender.

How to Prepare Artichokes 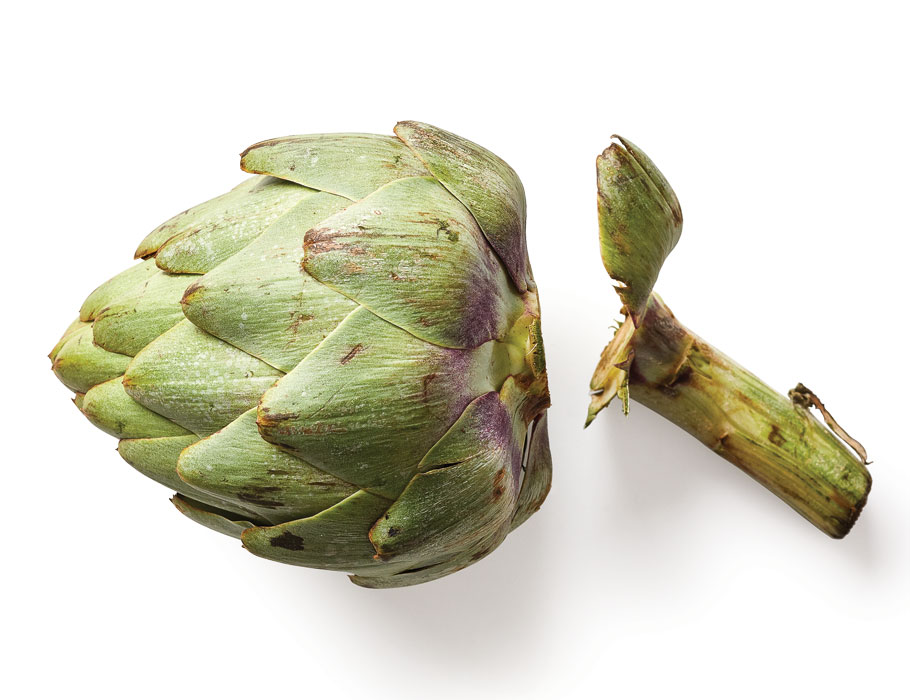 Step 1: Use a chef’s knife, or your hands, to cut, or break off the stems. 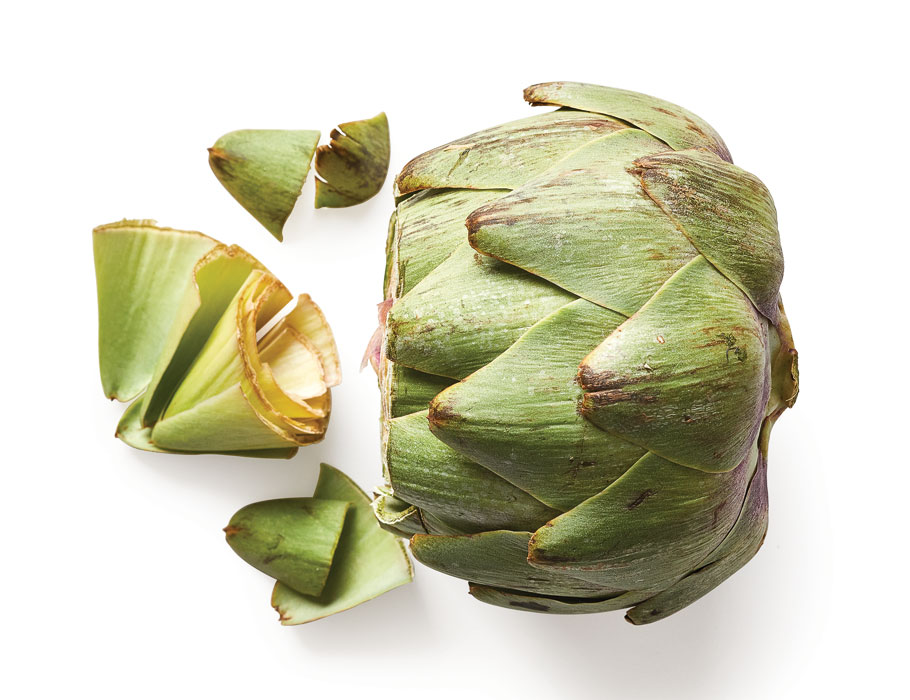 Step 2: Trim off and discard the crown (top one inch) of the artichoke — it won’t get tender enough to eat. 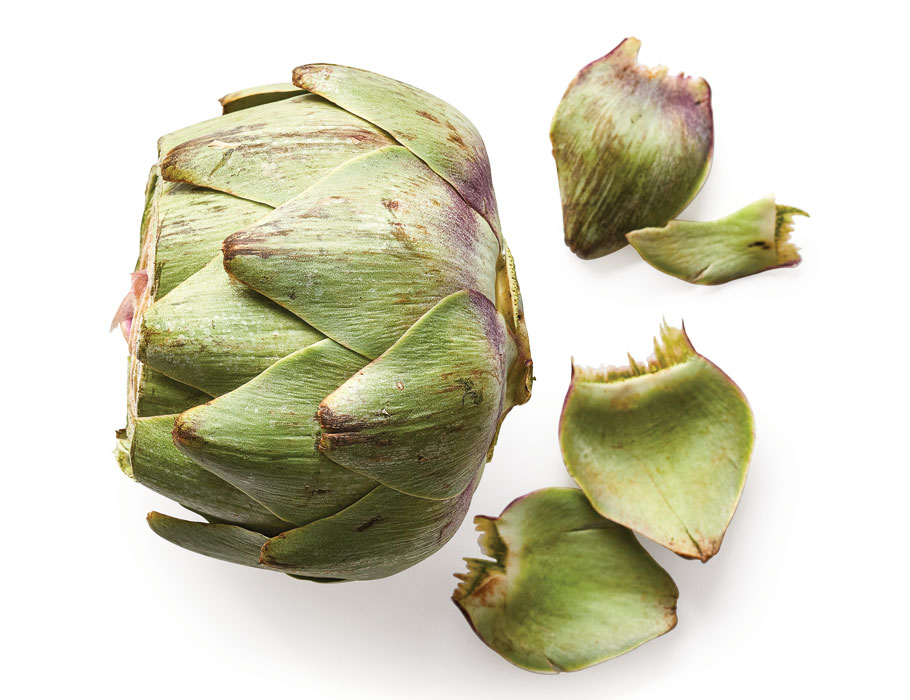 Step 3: Pull off any small, dehydrated-looking petals around the base of the artichoke. 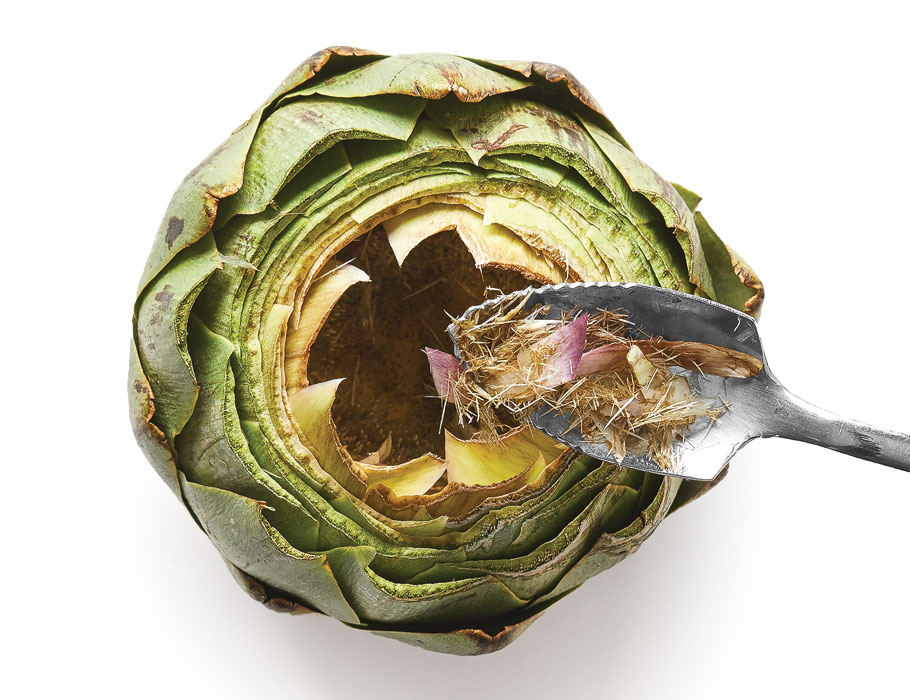 Step 4: Force the petals apart at the center and scrape out the fuzzy choke. A grapefruit spoon works well for this.

How to Prevent Artichokes from Turning Brown 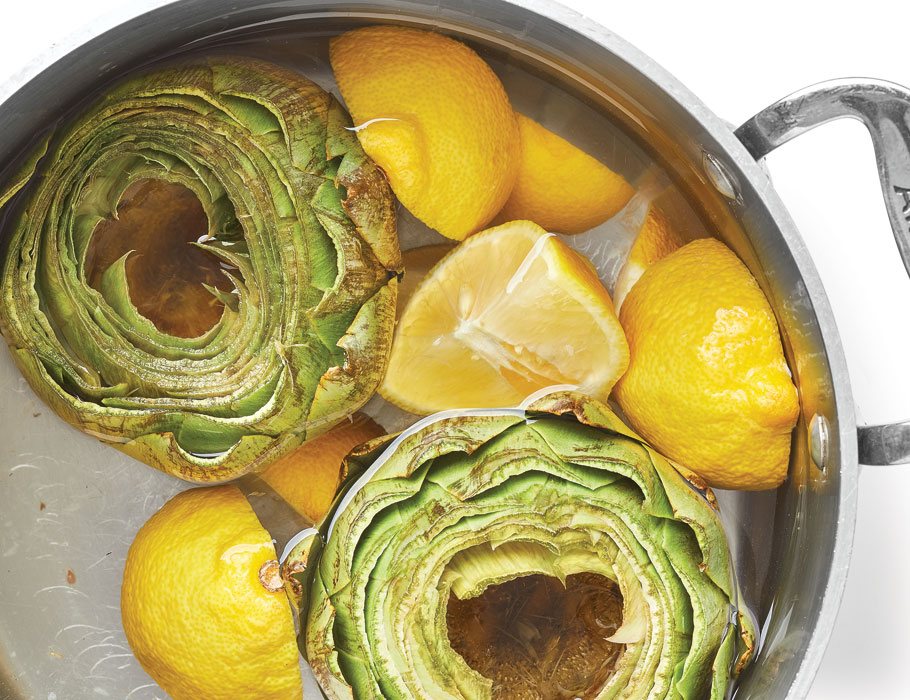 Artichokes begin to oxidize, or turn brown, immediately after cutting into them. To stop the browning, have a bowl of acidulated water ready to drop them into after trimming. Acidulated water is just a fancy name for water with added distilled white vinegar or fresh lemon juice (and the juiced lemons).

How to Cook Artichokes

Learn how to cook artichokes using any of these three simple methods. No matter which you choose, artichokes become delicious and shareable. 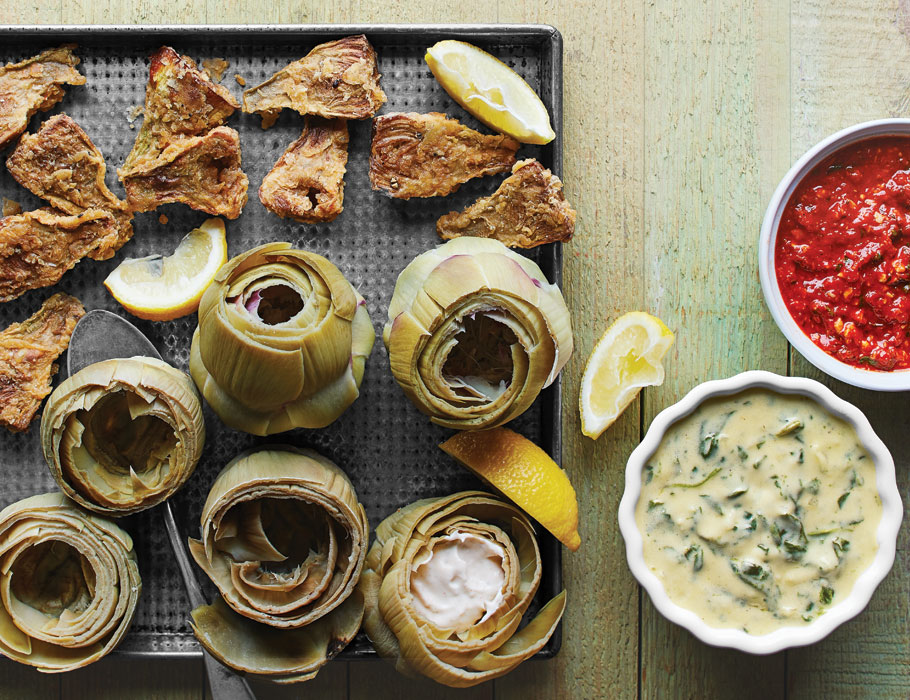 Prepare 6 artichokes, leaving 1 inch of stem. Remove all petals from artichokes, then run a paring knife around the edge of the artichokes to remove any tough bits until you reach the hearts. Transfer hearts to a bowl of acidulated water. Combine ½ cup flour, ½ tsp. kosher salt, and ¼ tsp. black pepper in a shallow dish. Beat 2 eggs in a separate dish. Heat 1 cup olive oil in a skillet over medium-high to 360° (you can use a candy thermometer or instant-read thermometer to test the oil temperature). Meanwhile, drain and pat dry artichoke hearts; dip into eggs, then toss in seasoned flour. Fry hearts in oil until golden and crisp, turning often, 5–6 minutes; drain on a paper-towel-lined plate and season with salt. Serve fried artichokes with lemon wedges.

Artichokes are good on their own, but doesn’t sauce make everything better? Serve your tender hearts with one, or all three, of these tasty sauces. 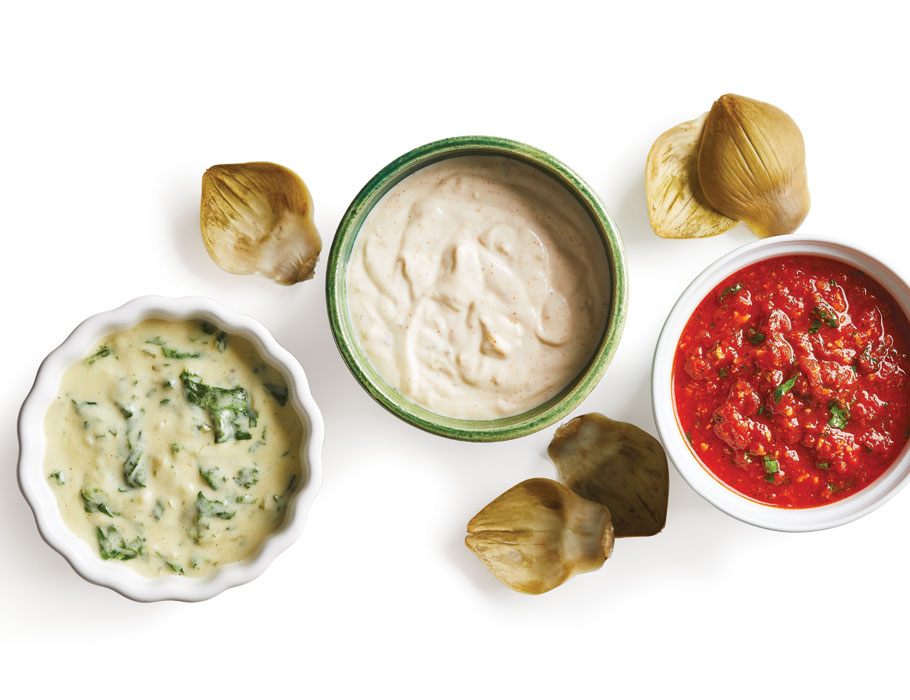