Tips › All About Chili 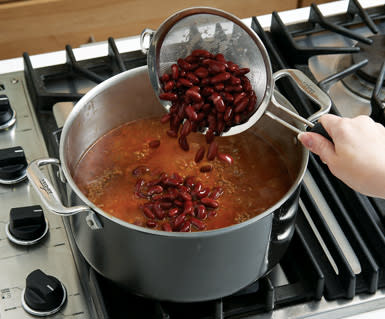 One of the more hotly debated topics in the food world is chili. Passionate cooks argue endlessly about what “real” chili is — meat vs. no meat; beans vs. no beans; and, red vs. green, are a few of the enduring discussions. But in spite of these differences, chili remains wildly popular, showing up on menus year round, not just in cold months. Here’s how to make sense of this complex dish.

In general, chili comes in two colors: red or green. Texans’ famed “bowl of red” consists of beef simmered in a heavily spiced tomato-based sauce. Beans are never part of the chili equation in Texas, but other regions commonly add kidney beans to red chili.

Green chili (chili verde) is typically pork or chicken cooked with green chile peppers and tomatillos, a green, tomato-like fruit. It doesn’t traditionally include beans but white beans or hominy show up in recipes.

A chili’s spicy heat comes from fresh or dried peppers, powders, or a mixture of all three.