What Is Pad Thai?

Pad Thai is the most popular dish at many Thai restaurants in the US — but what is it? We’ll give you a breakdown of the most common ingredients in this well-loved Thai dish. 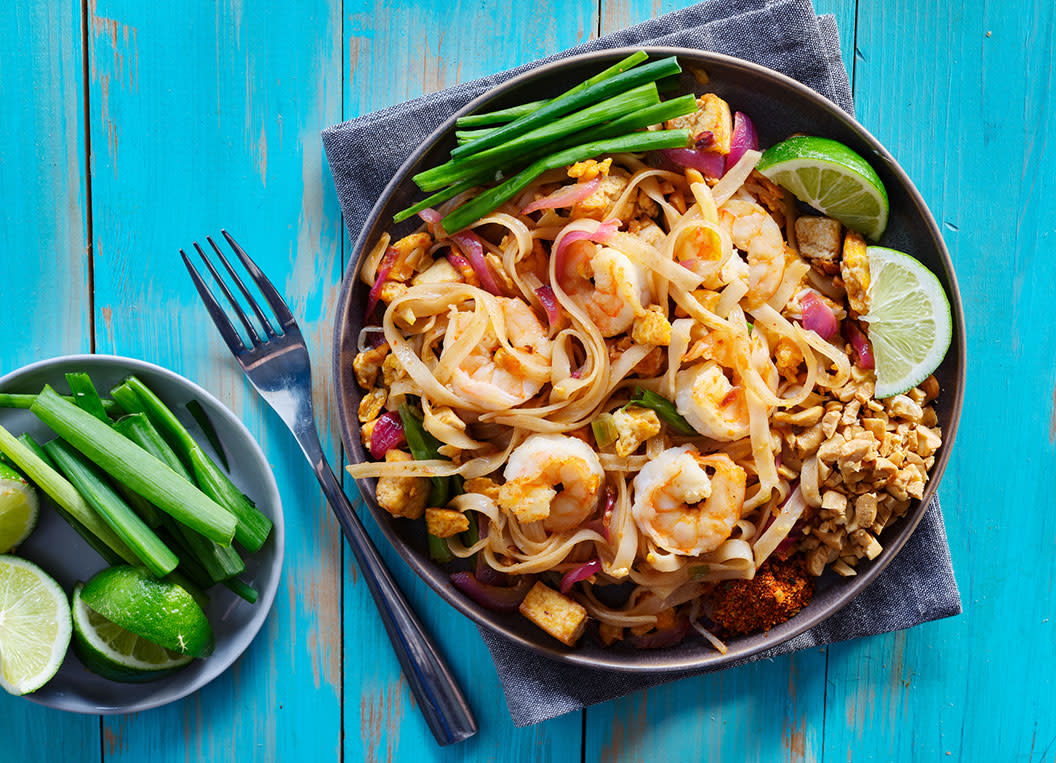 What is pad Thai? A popular dish whose name means “Thai stir-fry,” pad Thai is a stir-fry of rice noodles, eggs, tofu, and meat, with a sweet-sour-salty and slightly spicy sauce, and toppings of peanuts, fresh vegetables, and cilantro — sometimes served on the side. Pad Thai sauce often contains dried shrimp and fish sauce (which you can’t really taste). At first pad Thai might not sound like something from your comfort zone, but the final result is a toothsome noodle dish that's as tasty as they come.

Pad Thai emerged in Thailand in the mid-20th century, incorporating elements and techniques borrowed from Chinese cuisine. It was declared a Thai national dish around the time of World War II and quickly grew in popularity. Today, pad Thai is perhaps more popular than ever, both as a common street food in its native land and in Thai restaurants around the world.

Let’s break down the elements of pad Thai — the noodles, sauce, protein, and toppings — to get better acquainted with this habit-forming food.

The Noodles — What Kind of Noodles are in Pad Thai?

There are many different interpretations of pad Thai, but the thing they all have in common is the rice noodles. Rice noodles are made from rice flour, water, and salt, and are perfect for soaking up the intense flavors of pad Thai. There are several varieties of rice noodles used in Asian cuisines, but the shape that’s most often used for pad Thai, called rice stick or pad Thai noodle, is similar to fettuccine.

Chili Garlic Sauce: This is a bright red puree of chiles and garlic, essential for pad Thai. It’s the Asian “Tabasco” — a little goes a long way. Sambal oelek is an Indonesian type of chili garlic sauce that’s slightly spicier than the Chinese version.

Tamarind paste or lime juice: Tamarind is a staple in Thai cuisine and gives the dish its sour note with a tangy, dried fruit flavor that tastes somewhat like raisins and lemon. Look for pure tamarind concentrate or paste (but take note: the dark, syrupy pastes are actually much more potent than tamarind concentrate and need to be diluted with water). Or, substitute with lime juice.

Dried Shrimp and Fish Sauce: Fish sauce is made from fermented anchovies. It’s a flavorful thin, brown sauce that’s used as a seasoning. You won’t taste any fish if used correctly.

Tomato is not a traditional ingredient of pad Thai, but shows up frequently in American recipes.

The Protein - Is Pad Thai Vegetarian?

The most traditional protein to use in pad Thai is shrimp, but pork, chicken, and beef are popular options as well.

Eggs and tofu are usually incorporated as part of the basic stir-fry.

Pad Thai is often not vegetarian even without meat, however, because of the fish sauce and/or dried shrimp used to make the sauce.

The following are common toppings for pad Thai, and may be served atop the dish, as a garnish, or separately on the side: