All About Meringue: French vs. Swiss vs. Italian Meringue

While all meringues are featherweight and ethereal, they’re not all created equally. Originating from different European traditions, we’re exploring the similarities and differences of all three types — French, Swiss, and Italian meringues. Plus, we have tips and tricks to making perfect meringues every time. 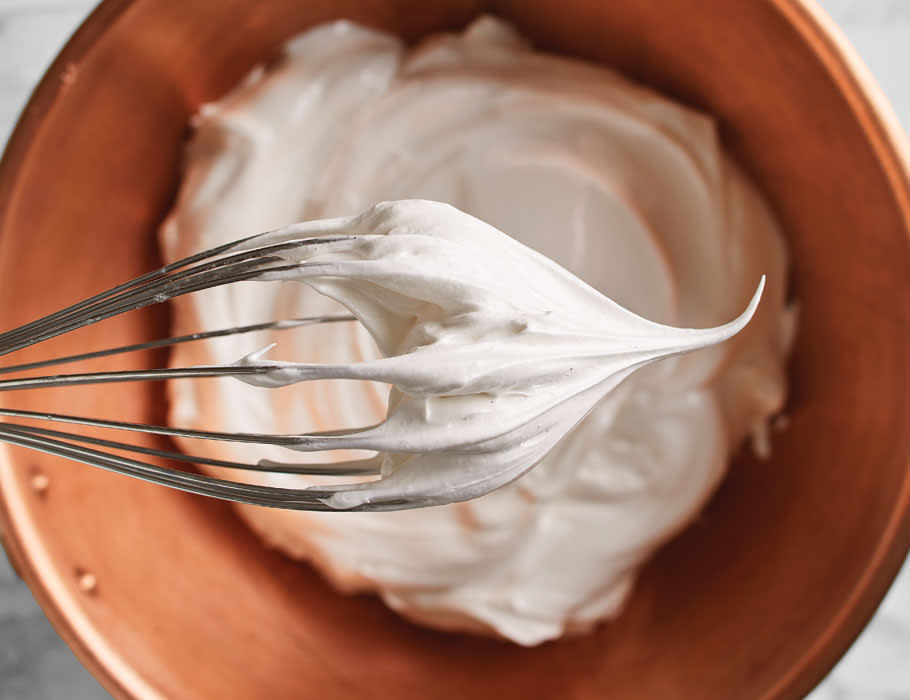 In its most basic form , a meringue is simply egg whites whipped with sugar. The air whipped into the whites causes them to foam and increase in volume (by up to eight times), while the sugar stabilizes the foam as well as sweetens it. Sometimes a stabilizing agent, such as cream of tartar, lemon juice, or distilled white vinegar is added. From soufflés to pie toppings to cookies and Pavlova, meringue can be served any number of ways. But not all meringues are the same. There are in fact three major types: French, Swiss, and Italian. The distinction depends on how the key ingredients — egg whites and sugar — are combined and whether any heat is involved in the process. This is an overview of the three, a few facts to keep in mind, and some best practices to follow when making meringue. For all types of meringue, the use of a stand mixer is highly recommended.

The Three Types of Meringue

The simplest, most common or classic type of meringue is the French meringue. It’s made by beating egg whites until frothy or soft peaks form (they’ll barely hold their shape), then adding the sugar gradually to make sure it dissolves, while continuing to whip the whites. Once all the sugar has been added, you’ll whip the meringue to stiff peaks (they stand up and stay in place when the beater is lifted), or as determined by your recipe.

French meringue is the least stable but lightest of the three. Sometimes it’s poached or folded into batters for cakes or soufflés, etc. But typically this type is spooned or piped into cookies, Pavlova, or a desired shape, and baked low and slow. Once baked it becomes crisp yet airy and shouldn’t be brown. 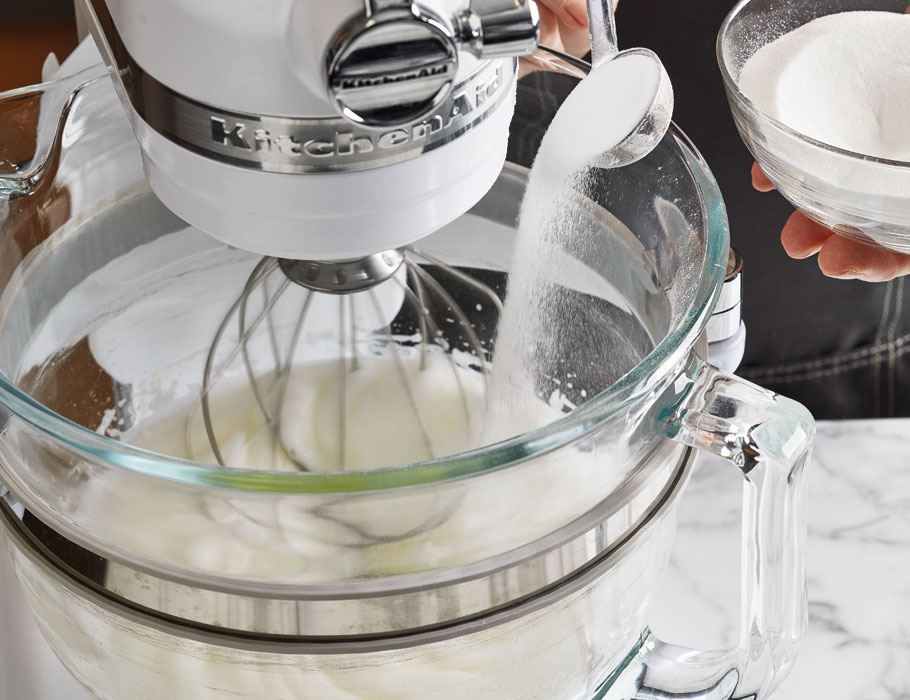 French Meringue Tip: To avoid a dry, grainy texture and to lend stability, begin adding the sugar no later than the soft peak stage.

Swiss meringue is a gently cooked meringue — the egg whites and sugar are (continually) whisked together and heated over a double-boiler until the sugar dissolves, the mixture starts to thicken, and it reaches about 130° on a candy thermometer (or as determined by your recipe). It’s then beaten, right away, off heat, until stiff, glossy peaks form and it feels cool to the touch.

It’s softer yet denser in texture than French meringue and is often used as a base for buttercream frostings, cookies, or Pavlova. Of the three types, this is considered the middle of the road in terms of stability. 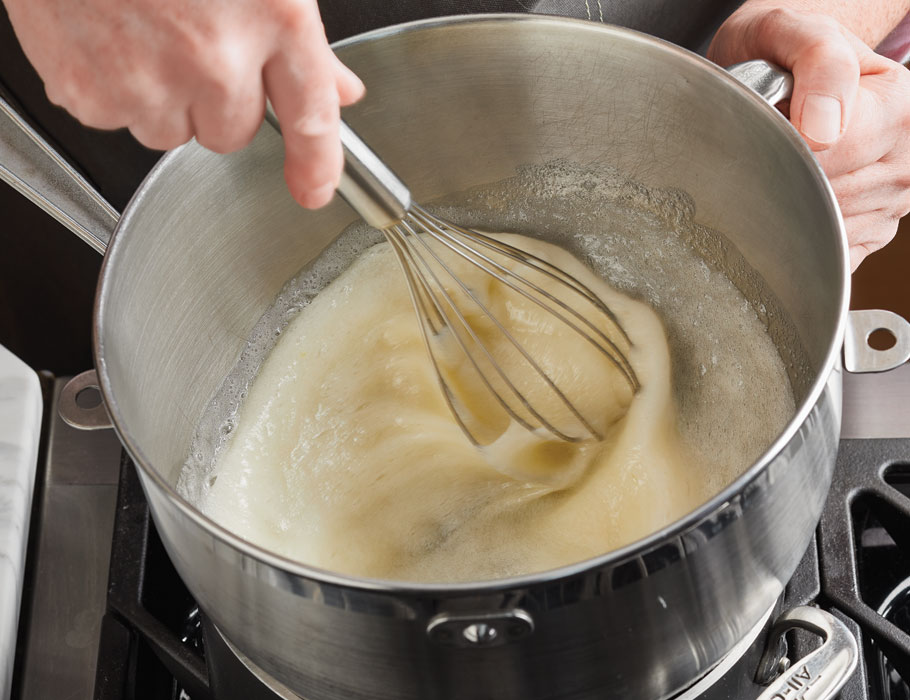 Swiss Meringue Tip: To avoid scrambling the eggs, the water in the double-boiler should be simmering but not touching the bottom of the bowl of egg whites and sugar.

The sturdiest of the three types, Italian meringue is a cooked meringue. Use a candy thermometer to track the temperature as the egg whites cook. It involves making a sugar syrup (sugar and water) cooked to the soft-ball stage (238–240°), and slowly adding it to whipped egg whites, with the mixer running, until stiff, glossy peaks form and the meringue feels cool to the touch. It’s considered the most challenging to make because it not only involves the syrup, but the syrup must be ready at the same time as the whites. Thus, this may require raising or lowering the heat of the syrup and/or the speed of the stand mixer.

Italian meringue should have a soft and creamy texture — they’re usually used for buttercream or meringue frostings or for decorating pastries. 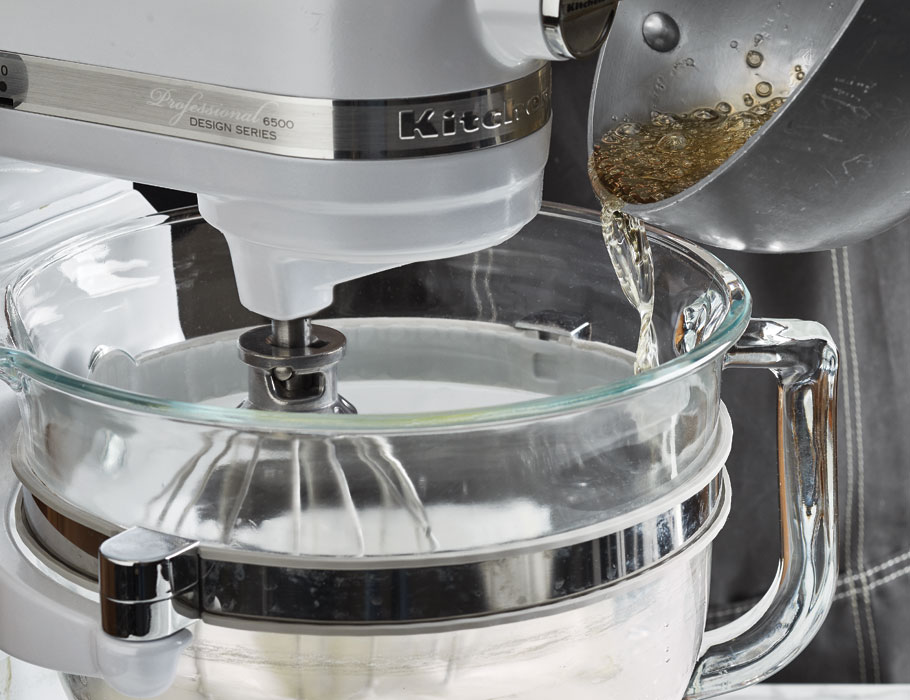 Italian Meringue Tip: So as not to splatter the syrup, pour the hot sugar syrup down the side of the mixer bowl or between the side and the beater, but not directly onto the beater.

COLDER EGG WHITES are easier to separate and make a more stable meringue, but they take longer to whip. ROOM TEMPERATURE EGG WHITES produce more volume because they’re easier to whip air into.

BREAK EGGS, one at a time, on a flat surface. Separate each egg into two small bowls — one for the yolk and one for the white. Make sure the white contains no traces of yolk, then transfer it to your mixing bowl.

FAT INTERFERES with the development of egg white foams (and egg yolks contain fat). THE MIXING BOWL, as well as the whisk or beaters, should be impeccably clean.

USE THE PROPER MIXING BOWL: Glass, stainless steel, or copper bowl are best to whip the egg whites. Avoid plastic, as it’s more porous and may unknowingly contain traces of fat.

EGG WHITES BEATEN in a copper bowl are more voluminous and stable because the copper reacts with the proteins in the whites the same way cream of tartar does.

IF USING A COPPER BOWL, don’t add a stabilizer, like cream of tartar, as it will be too acidic and will cause the egg whites to leach too much copper from the bowl.

ADDING A PINCH OF SALT to egg whites reduces viscosity, giving greater volume to the meringue. AND USE SUPERFINE SUGAR. It dissolves faster and creates a better textured foam than granulated.

YOU CAN START TO ADD THE SUGAR at the frothy stage, but the whites take longer to whip. You’ll get good volume faster if you add it when soft peaks form, but the foam can dry out if you wait too long.

AN EASY WAY TO TEST THAT THE SUGAR IS DISSOLVED is to rub a little of the meringue between your fingertips. It should feel smooth, not gritty.

YOU’LL KNOW IF YOU OVER-WHIP the meringue because it will be grainy, dull, dry, and start to clump, or it may begin to separate.

JUST WHIPPED MERINGUES are extremely fragile. They should be made right before they’re to be used. If they sit too long, they’ll start to break down.