Tips › How to Prep Shrimp For Cooking

How to Prep Shrimp For Cooking

Preparing shrimp for cooking isn't difficult, but there are several methods involved. Use these tips when preparing the Salt & Pepper Shrimp.

To shell shrimp, start by pulling on the shell underside at the large end of a shrimp. Grasp the legs, then peel the first few sections of the shell to one side and around back to the other. Pull off the tail, and remove any stray legs or pieces of shell.

__Leaving or Removing Tails: __When shrimp are going to be served as finger food, keep the tails on. Remove the shell, but stop just before the last segment above the tail. To remove the tail, flatten and fan out the tail. Gently pull and wiggle the shell back and forth until the tail separates.

__Deveining: __A shrimp's vein is really its intestinal tract, and removing it is a matter of choice. Eating it won't hurt you, but some people don't like the gritty texture. It's wise to always devein shrimp that are 16-20 count or larger. To devein, grasp the shrimp on both sides of its body and gently squeeze. Make a shallow cut down the length of the shrimp's back, then lift out the vein with the tip of a knife.

__Butterflying: __Butterflying lets the shrimp cook evenly and quickly, and it looks nice. To butterfly shrimp, after deveining, make a deeper cut down the center of the shrimp, being careful not to cut it in half. 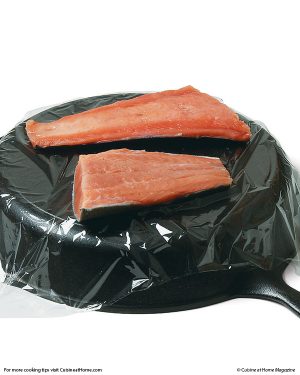 An Easy Hack for Thawing Meat

Find yourself in a pinch with frozen meat and dinner closing in? Use this tip to speed up thawing time!