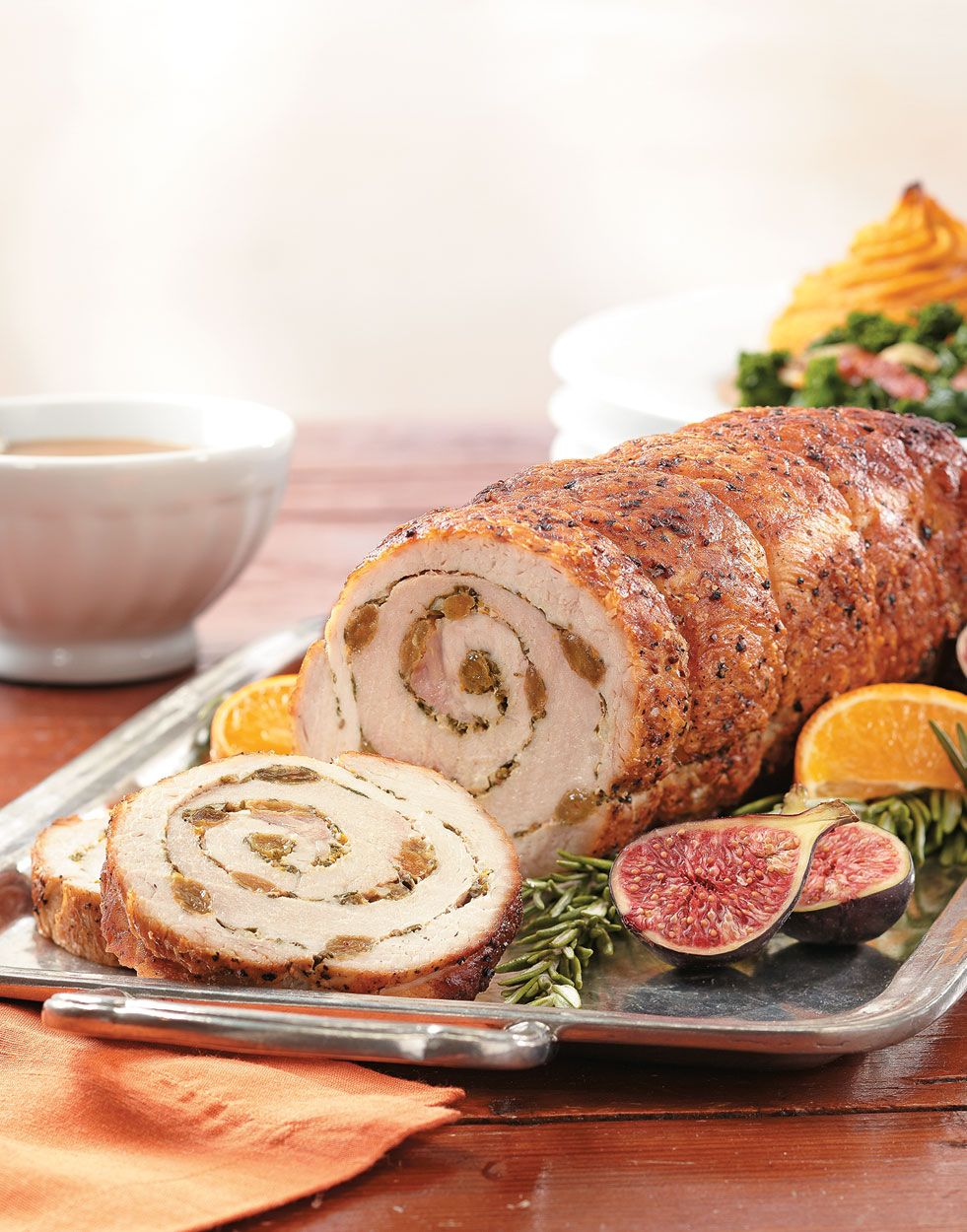 If you’re looking for something out of the ordinary this holiday, take a Tuscan approach. Start by swapping turkey for this classic stuffed and rolled arista [ah-REES-tah] pork roast with pan sauce. The word arista comes from the Greek word aristos, meaning “the best,” and refers to the quality of ingredients used to stuff the pork. Use the roll cutting method described below to “unroll” the pork loin, then stuff it with golden raisins and fresh herbs for the best pork ever.

FOR THE PORK, COMBINE:

FOR THE PAN SAUCE, MELT:

Try to find a roast right at 3¼ pounds. A little less is fine, but any larger and the roast will be too big to fit into your sauté pan.

Cut into pork loin with a boning knife parallel to cutting board, about ½-inch from the bottom of pork. Continue slicing and unrolling until the pork is flat and “unrolled.” (Take your time and keep your knife parallel to the board to maintain an even ½-inch thickness.) Drizzle 1 Tbsp. water over pork, then cover with plastic wrap.

Pound pork with the flat side of a meat mallet to ½-inch thick. Spread herb mixture over pork, sprinkle raisins over herbs, and season with salt and pepper.

Tightly roll pork into a log and snugly tie kitchen string around it at 1½-inch intervals. Season outside of roast with salt and pepper. (If stuffing ahead, don’t season until just before searing.)

Sear roast in remaining 2 Tbsp. oil in a large ovenproof sauté pan over medium-high heat until browned on all sides, 8–10 minutes.

Cover pan with foil and transfer to oven. Roast pork 20 minutes, carefully remove foil, and roast until a thermometer inserted into the thickest part registers 145°, about 20 minutes more. Remove pan from oven. Transfer roast to a cutting board and tent with foil. Drain excess oil from pan.

Deglaze pan with wine, scraping up any brown bits; reduce until nearly evaporated, 7–8 minutes. Whisk in broth, orange juice, and honey; bring to a simmer.

Combine softened butter and flour to form a paste, then whisk into sauce. Simmer sauce until thickened, about 1 minute; season with salt and pepper

Remove string from roast, then thinly slice; serve with sauce

Slide the knife tip just under the silverskin and slice to the edge of the loin to create a flap to hold.

With knife parallel to the board, cut into the right side of the roast about 1/2 inch from the bottom.

An easy way to visualize cutting the pork loin is to imagine unrolling it like a roll of paper towels.

Roll the “stuffed” pork tightly so it cooks evenly and yields the prettiest slices, and so the filling stays in.

Tie the strings snugly against the roast, double-knotting so the roast stays tightly rolled during roasting.

Searing the roast adds more flavor to both the roast and to the sauce that’s made in the same pan.

Salmon is available year-round, thanks to farming techniques, so you can enjoy it any time …

There’s nothing more American than canned pork and beans. This recipe takes the classic …

Puttanesca is said to have been named for the spicy “working ladies” of Naples. This …