Step Up Your Baking Game by Weighing Your Ingredients

I hate to tell you, but you're probably adding too much flour to your recipe. 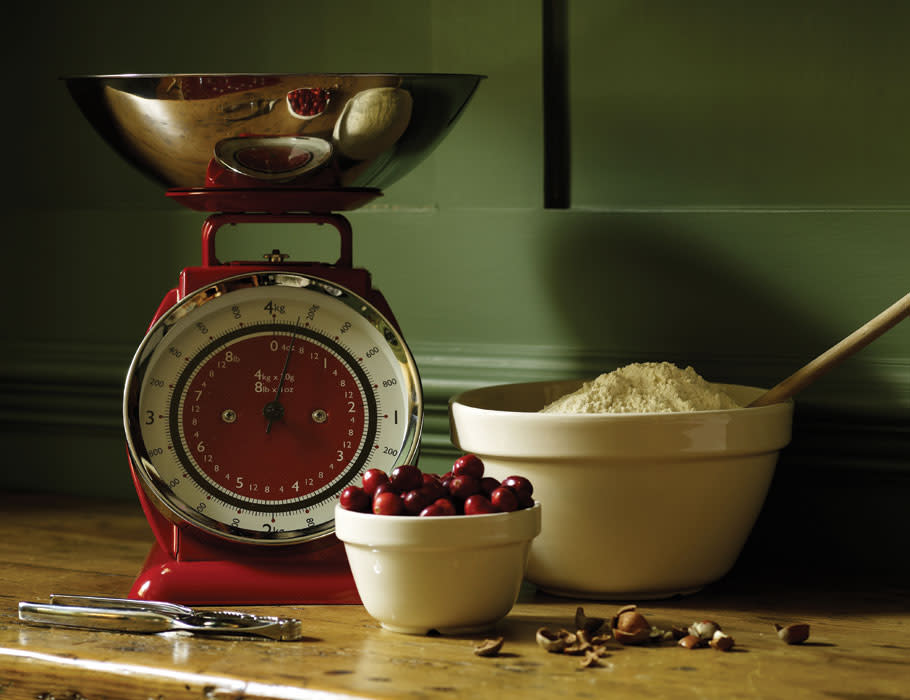 Behind the scenes, you’re sure to see a digital scale in every bakery. Professional bakers rarely (if ever) use volume measurements when baking. But why is that? Because baking is a science and metric weights (in grams) are far more accurate than volume measurements, and there is little to no room for error. If you know how much your ingredient should weigh, or your recipe provides metric measurements, and you have a quality scale, you really can’t go wrong.

Yes, it’s easier to grab a set of measuring cups and get to baking, especially if your recipe doesn’t already contain weights, but I beg you to give baking by weight a shot. While Cuisine at Home doesn’t write recipes using metric weights, you can try your hand at converting our recipes and take note of the results. King Arthur Flour has an incredibly comprehensive list of measurements by ingredient — this is my go-to resource when developing my own recipes or converting someone else’s recipe to their metric equivalents. If you can’t find your ingredient in this chart, turn to trusty ‘ol Google and try to find the weight there. As a last resort, you can responsibly measure the ingredient yourself using the imperial system — aka cups — then weigh it using grams to make your own conversion chart. And while not every ingredient benefits from weighing (like sugar, which is almost always accurate in cups), things like flour and brown sugar are especially susceptible to inaccurate measuring. Why? Because people measure flour in a multitude of different ways — some spoon and level, some scoop and level, some pack and shake it to “level,” and some go completely rogue and don’t even have a full cup (or have an overflowing cup). Brown sugar is full of little air pockets and clumps, and your definition of “packed” may be very different than mine.

But I say, if you're going to measure your flour or brown sugar by weight, you might as well do it for all your ingredients.

To illustrate the variance in how people measure, we performed a little experiment in the test kitchen:

This also brings about another issue — the actual volume of a set of measuring cups can vary significantly from brand to brand!

These differences may not seem like much (I mean, what is 30 grams, anyway?), but that’s almost a ¼ cup difference according to KAF’s standard weight of 120 grams for all-purpose flour. Imagine that multiplied in a recipe that has several cups of flour, like our Flaky Pie Dough, Applesauce Bundt Cake, or Pfeffernuesse cookies. You could be adding upwards of ½–¾ cup of extra flour to your recipe. This can lead to a hard, dry, or crumbly texture — or even worse, it can completely alter the ratios in your recipe and lead to mutually assured destruction. To go a step further, imagine the horrors that could occur if you're doubling a recipe. Cakes, cookies, and pie dough are especially susceptible to textural changes with the addition of too much flour.

Which food scale should I buy?

We have two favorites in the test kitchen:

OXO's digital food scale is my scale of choice at home. It's durable, reliable, and has a nice pull-out display for those times when you have a big mixing bowl resting on the scale. Plus, the top is removable so you can give it a thorough washing.

The Escali Primo food scale is a fan favorite (Bon Appetit has written several articles about it). It comes in a variety of colors is compact and easy to clean.

What else can I weigh?

But I don’t just stop at weighing my ingredients when baking. I also do this for cheese, meat, greens, herbs, and pasta (because who can ever get a pasta serving size right?), although I generally weigh in ounces for these ingredients. Why? Because it’s nearly impossible to accurately measure cheese, herbs, and greens in a cup. You can either really pack it in there and end up with waaaay too much, or you can casually toss your ingredients in the cup and end up with barely enough. Plus, who knows how the recipe writer measured their ingredients.

I haven’t even gotten to the best part — baking with a scale usually involves only a spoon and a mixing bowl. Everything gets added to the mixing bowl you were already going to use, and the spoon and bowl go right into the dishwasher when you’re done. Why dirty three extra measuring cups when you can dump everything into the bowl?

Have I convinced you yet? Maybe not, but as for me, I’ll keep my scale close at hand.