A Guide to the Different Types of Salt

Don’t think for a moment that salt is just salt or that all salts are created equal. If you’re into cooking, here’s the information you need to know to make all your food taste even better. 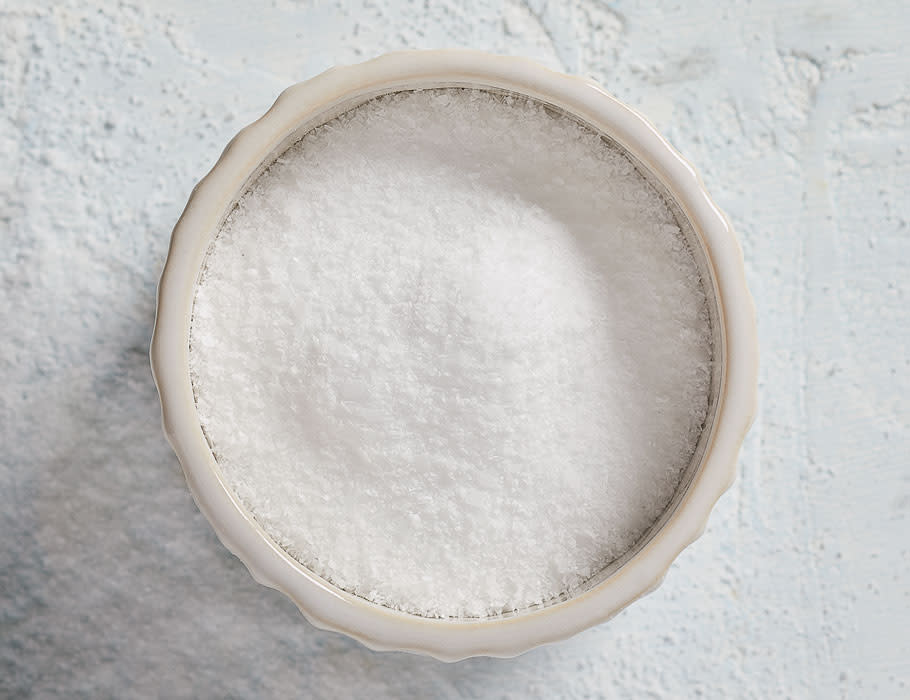 Salt might just be one of the most important commodities in the world — thank goodness there’s plenty of it.

Have you ever wondered why food in restaurants tastes so much better than food prepared at home? Besides years of training, chefs don’t skimp on butter and salt. And what’s not to love? Real butter makes everything better, but salt is a different story. Using the proper amount of salt is imperative, but the kind of salt is even more important. Top chefs know this and have been using specialty salts for years.

Salt has always played a role in society. The ancient Greeks traded salt for slaves resulting in the phrase “not worth his salt.” Roman soldiers were partially paid in salt — the word “salt” comes from the Latin word salarium, meaning salary. Today, salt has over 40,000 applications from manufacturing to medicine, but to most of us, its main function is in the kitchen.

Like so many things, salts have become trendy — red salt from Hawaii, Jurassic salt from Utah, and the multitude of sea salts from Europe. Is the salt trend overrated, or are some of those Mediterranean sea salts really worth $30 a pound? Well, maybe, but you need to know the basics before deciding.

Three Main Types of Salt and The Differences Between Table, Kosher & Sea Salt

TABLE SALT (granular salt) is what most of us know. It’s mined and processed to form small, uniformly shaped cubes. Additives are added to prevent caking and some medical problems. Most table salt is mined like coal or extracted by forcing water down into subterranean salt deposits. The resulting brine is pumped out and processed to form tiny, dense, cube shapes that don’t dissolve very well.

KOSHER SALT is made by compacting granular salt between rollers which produces large irregular flakes. This shape allows the salt to easily draw blood when applied to freshly butchered meat (part of the koshering process). While some brands of kosher salt contain no additives, like anti-caking agents, other brands do, so be sure to check the label.

SEA SALT is created when ocean waters flood shallow beds along coastlines. During the summer months, the water evaporates leaving large salt crystals. The different waters and minerals from the surrounding land lend their flavors to these flaky salts.

All salt is not created equal

From a chemical standpoint, all salt is the same — it's sodium and chloride. But there are vast differences in the harvesting location, manufacturing process, uses, flavor, and texture of different varieties and brands. In terms of kosher salt, there are two primary brands available in the US: Diamond Crystal and Morton. Depending on where you live, one might be more readi

available than the other, but you can purchase both online. Both brands of salt are harvested from underground salt beds, but their productions methods differ, causing completely different salt crystals to form. Morton kosher salt is hard and coarser, while Diamond Crystal is soft and finer, making it taste less salty in comparison. ##In general, you can use either brand to good results. In the Test Kitchen, we use Morton kosher salt because it's easily available in our area, but many of us prefer Diamond Crystal for home cooking. We simply order our stash from Amazon!

Most recipes call for salt by volume (e.g., 1 teaspoon), but 1 teaspoon of table salt, Morton's, and Diamond Crystal are not equal. To substitute one salt for another, follow this general rule:

A little simple math will help you convert in recipes IF you know what brand the recipe developer was using. This is why "salt to taste" is often the norm in recipe writing.

When seasoning (especially meat), sprinkle salt from a high distance (think salt bae without all the flashiness) — about 12 to 16 inches above whatever you're seasoning is perfect to ensure full and even coverage.

So what type of salt should you use? 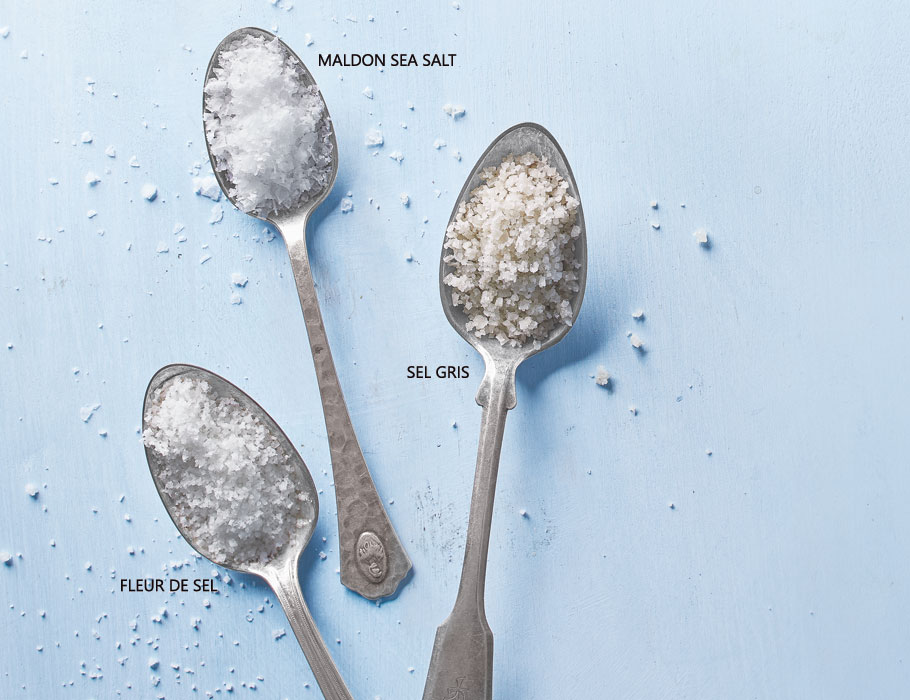 England’s Maldon sea salt (only produced by the Maldon Crystal Salt Company) is worth its $11 a pound price. This finishing salt gets its delicate flavor from a tradition of boiling sea water to form hollow pyramid-shaped crystals. You can actually crush the crystals between your fingers. This makes for a light taste on your tongue.

Gray salt is hand-harvested on France’s Atlantic coast where shallow basins are flooded with ocean water. Evaporation takes place between May and September when artisan harvesters rake the salt to the edge of each bed. The salt picks up its gray color and distinct, briny flavor from minerals in the bed’s clay bottom.

A by-product of Sel Gris, Fleur de Sel is one of the most widely used and demanded artisanal salts in the world. It is created only when the winds are calm and the days are warm. It is on these rare few days that the gray salt “blooms” lacy, white crystals. This is the flower of salt and is carefully hand-skimmed from the surface. Use Fleur de Sel sparingly on foods just before serving. 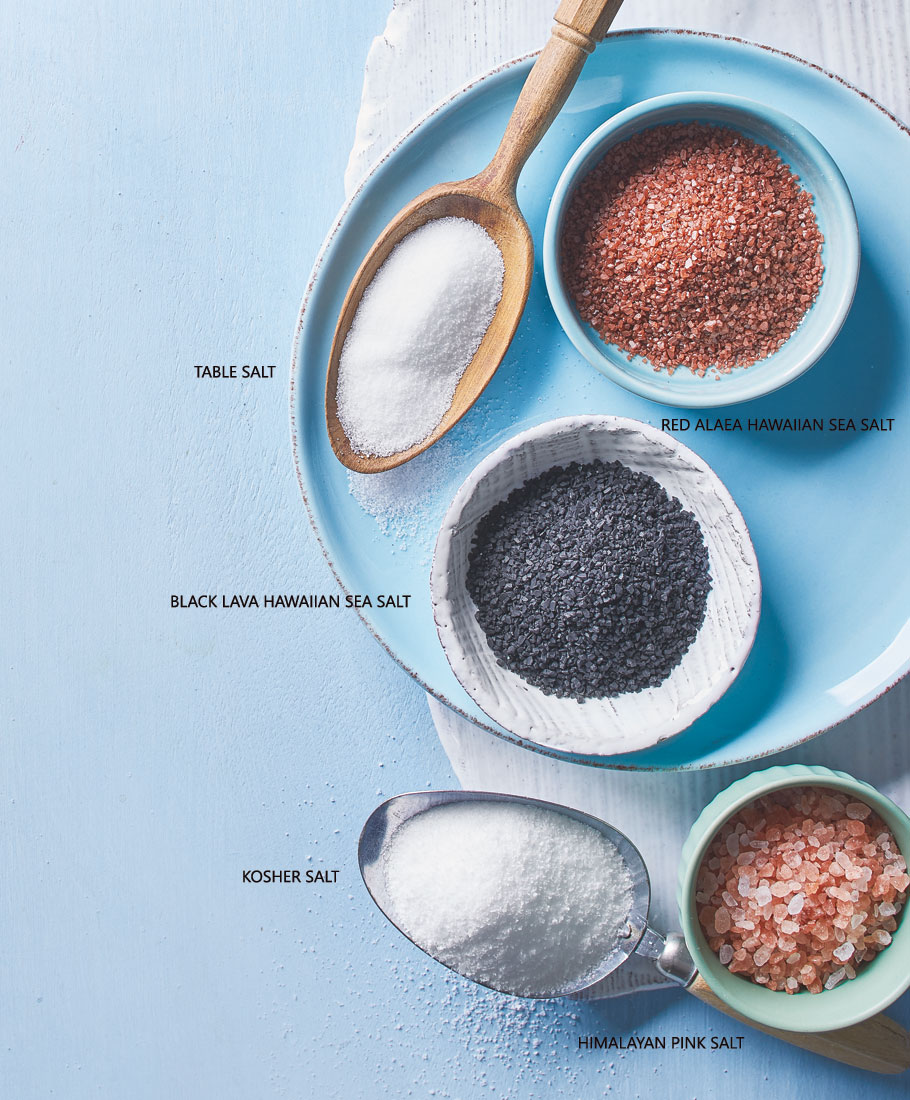 In the Test Kitchen we really only use table salt when baking, and sometimes not even then. It always seems to taste really salty and harsh. The reality is that it isn’t any saltier than other salts, it’s just that the crystals don’t dissolve well because of their cubic shape. Plus, with the often included iodine and anti-caking agents, table salt tends to have a bitter flavor. Speaking of it’s cubic shape, table salt packs more tightly, teaspoon for teaspoon, that other salts, like kosher. In fact, the general rule is to use half the amount of table salt for any recipe calling for kosher salt.

Kosher salt doesn’t have cubic crystals like table salt does — they’re either flat-shaped crystals, forced into this shape from pressing, or formed into pyramidal crystals via evaporation. These structures dissolve easily and impart plenty of flavor because of their large surface area. Due to less processing than the table variety, and no additives, this clean-tasting salt is the primary salt used in our Test Kitchen.

This is a good general purpose sea salt that’s mined from one of the richest salt fields in the world — the Punjab region of Pakistan (about 190 miles from, and 5,000 feet below the Himalayas). Himalayan salt is believed to contain remnants of the original primordial sea, giving it a lovely pink hue and high trace mineral content, though no evidence has proven any of the health claims made about Himalayan salt.

There are hundreds of varieties beyond the basics we covered her, from smoked to flavored salts. Experiment and find the varieties you love! 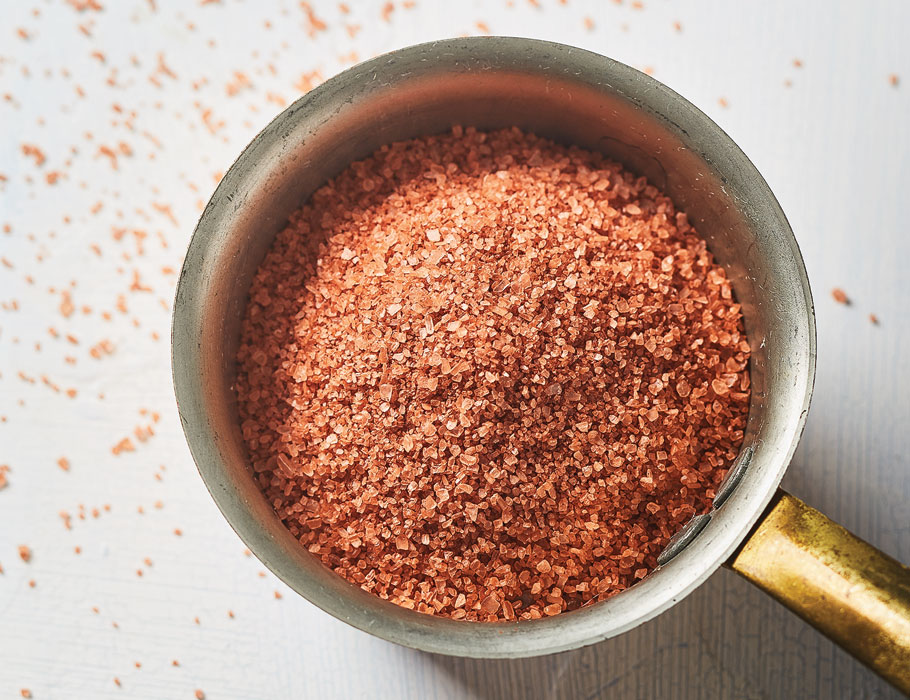