The Best Turkey Fryers for Cooking Delicious Meals at Home

Frying is a simple way to make food taste good. These days, we can fry just about anything — potatoes, chicken and even ice cream. As long as it tastes good when fried, it’s fair game. But there are certain foods that, while tasty when fried, can be a little more trouble than usual. One of these foods is a whole turkey, for which you’ll need more than just a frying pan to get the job done.

Enter turkey fryers. These devices are special frying containers that are made for turkeys and other large foods. You can place an entire turkey or any other food of your choice inside and fry or boil it to perfection. With the premium turkey fryers of 2023, you’ll have fried turkey ready to eat on your dinner table in no time at all. 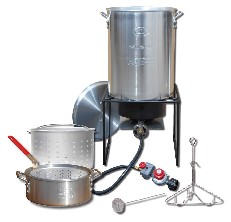 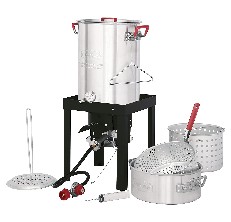 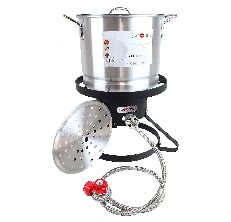 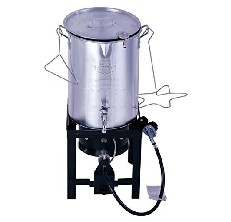 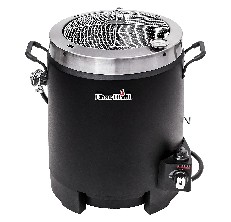 Looking to cook a good, hearty meal for the whole family? This guide will cover what you need to know about turkey fryers and how to successfully purchase one.

What Is a Turkey Fryer?

A turkey fryer is a device that can cook and fry a turkey in a pot of oil. Frying requires you to submerge the entirety of the food inside the oil, so while it is possible to deep-fry smaller food on a pan or cooking pot, this method doesn’t provide space for an entire turkey. Turkey fryers, however, do have enough capacity for a turkey to be completely submerged in oil for an optimal cook.

Why You May Want a Turkey Fryer

They’re the best way to fry a turkey

Fried turkey tastes very different from oven-roasted turkey, and many people prefer the former over the latter. Unfortunately, it’s not as easy to prepare a fried turkey as it is to prepare a roasted one, which is why you’ll need a device made specifically for frying turkey.

Turkey fryers have the space to accommodate an entire turkey as well as the oil needed to fry it to perfection. They also sometimes have special features to make the process safer, such as the inclusion of spigots for easy disposal of the oil after use.

While turkey fryers can fit an entire turkey inside, that’s not the only thing you can put in. Soups are another great dish to prepare with a turkey fryer. There’s a lot of space for the ingredients, so you can boil large batches at once for the entire family or larger gatherings. You will need to clean the fryer thoroughly before using it as a large pot, of course, but the extra effort will be well worth it as making soups with one is surprisingly easy and effective.

You can fry other foods, too

So, let’s say that you’ve just fried a turkey with the turkey fryer, and now you have a large vat full of oil that is still perfectly usable. What do you do with it? It would be a waste to just dump it somewhere, so a good alternative would be to reuse the oil for cooking something else. Fortunately, you can transform a turkey fryer into a deep-frying station for fries, chicken drumsticks and more.

Many turkey fryers come with additional fry pans and baskets that you can place inside the pot. These baskets and pans hang onto the top of the pot, allowing the oil to seep through and fry your food.

This probably doesn’t have to be said to those who are already experienced with frying turkeys, but for those who aren’t — be very, very careful when frying a turkey. Unlike frying chicken legs or fries at home, you’re going to be using a lot of cooking oil which can be a huge hazard for both you and anyone around you. One mistake can lead to the oil spilling all over the place, making a mess and risking serious burns.

In fact, cooking oil-based burns have become increasingly common over the past few decades. Of course, part of this is because more people are simply working with cooking oil than ever before, but it also shows the very possible risks associated with cooking and frying a turkey.

Be wary of propane

Oil isn’t the only danger you have when cooking and frying turkey with a turkey fryer. Virtually all outdoor turkey fryers use propane to fuel the device, and propane on its own is highly dangerous. It’s highly combustible and can lead to serious accidents if the gas leaks out of the tank while you’re frying the turkey. During the 1990s, the US reported an average of 3,000 propane fires and explosions per year. Burns from oil are one thing, but propane fires can be a whole lot more dangerous, especially if you’re working near any flammable substances.

Turkey fryers do not come cheap. A single turkey fryer kit includes a pot for the oil, a burner and a hose to connect to a propane tank. The pot will also often come with a stand so that the burner has space beneath it for support. Finally, some turkey fryers come with additional accessories, such as marinade injectors, frying pans and baskets. All in all, you can expect to spend around $100 for a decent turkey fryer set.

It’s also worth noting that this price does not include the oil or propane, both of which you’ll have to buy separately. In particular, you’ll need to spend quite a bit on oil as you’ll need a lot of it to cover the entirety of the turkey in the pot. And even oil-free turkey fryers use propane to fuel the device, so you’ll be spending money on propane regardless, too.

Compare the Best Turkey Fryers of 2023

If you want to fry a turkey, you’ll need plenty of space for it, and the King Kooker Propane Outdoor Turkey Fryer has plenty of room. This fryer kit contains everything you need to fry a whole turkey, turkey parts or anything else that fits inside. The large container comes with a set of racks and hooks that you can use to hang the turkey inside the pot while it cooks. There’s also a hose and regulator to control just the right amount of propane to use for the job.

Aside from the basics, this product also comes with a couple of neat little accessories that you can use with the fryer. There’s a fry pan and basket that you can place inside the pot, essentially turning it into a stove of sorts. The holes on the pan and the basket let the oil through so you can cook food without having it fall to the bottom of the pot. This turkey fryer is the best overall option for those who want to cook turkey, plus whatever else they want.

While the previous product was the best all-around choice, it fell somewhat short — literally. The stand was a bit too short for taller folks, so you had to either squat down quite a bit or have a small stool ready to get onto the fryer’s level. This propane turkey fryer, on the other hand, is tall enough that you won’t have to bend so far down to reach it. The stand is tall and, more importantly, durable, so it won’t easily tip over and spill hot oil all over the place.

The pot comes with a variety of baskets and pans that you can use to both fry and boil food to your liking. The different size options available are great to have to keep your options open, too. There’s also a marinade injector that comes with your purchase so you can work on your meat right before you dip it inside the pot. It’s a great buy overall and worth the price.

Another way of preparing foods is through steaming. Steaming involves the use of hot water to cook and prepare food, giving it moisture and flavor that you normally wouldn’t get via frying or boiling. This turkey fryer from GasOne can serve as both a boiler and a steamer depending on your needs. The pot has plenty of space to work with for soups, and while it may be a bit small for large whole turkeys it’s large enough for many other dishes.

One interesting feature worth noting is the steel-braided hose found at the bottom of the burner. This hose is more durable than other burner hoses, making it safer and more reliable for outdoor use. The gas inside the hose will flow safely without any pressure changes, ensuring no accidents happen.

This next option is an interesting one — IM RIZKI’s gas turkey fryer comes with not just a hanging rack for your turkey but also a spigot. Spigots are great to have when serving juices and the like, but what good would they do in a fryer? Well, there are a few reasons why you’d want to have a spigot in a fryer. For one, disposing of hot oil can be dangerous and difficult — you can’t just toss the oil anywhere, after all. The spigot lets you pour out the oil in a controlled manner to make the process safe.

Aside from this, you can use the spigot to distribute soups if you are boiling any inside the pot. It may be a little odd to dispense soup via a spigot, but it’s efficient — and when you’re cooking outdoors, efficiency matters a lot.

Did you know that you don’t need oil to fry something? Char-Broil’s turkey fryer uses no oil whatsoever and still makes a good fried turkey in a matter of minutes. The device is very simple to use and carry around, with two handles on either side of the pot for easy lifting from one place to another. You can place the fryer atop any flat and hard surface to make sure that it stays in place reliably.

Being able to fry a turkey without the oil changes things. For one, you won’t have to spend money on oil anymore — this is huge considering that you’d normally need to use a lot of oil to fry a single turkey. Second, since you’re not using oil, the resulting turkey won’t be as high in cholesterol and other substances that you’d usually find in fried oil. It’s a healthier alternative to fried turkey without sacrificing the flavor.

A: Yes, it does. Many people claim that fried turkey has more moisture and crispier skin than oven-roasted turkey.

Q: Is it faster to fry a turkey than to oven-roast it?

A: Generally, yes — it is faster to fry a turkey into a ready-to-eat state than it is to oven-roast it.

Q: Can I use a turkey fryer to fry other foods?

A: Yes. With the help of any included pans or baskets, you can deep fry many other foods. 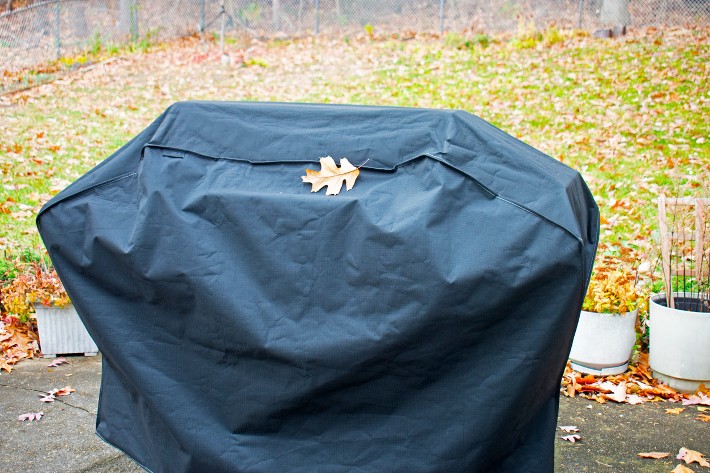 Keep Your Grills Clean and Safe With These Best Grill Covers Satisfy Your Cravings for Grilled Food With the Best Grill Kits 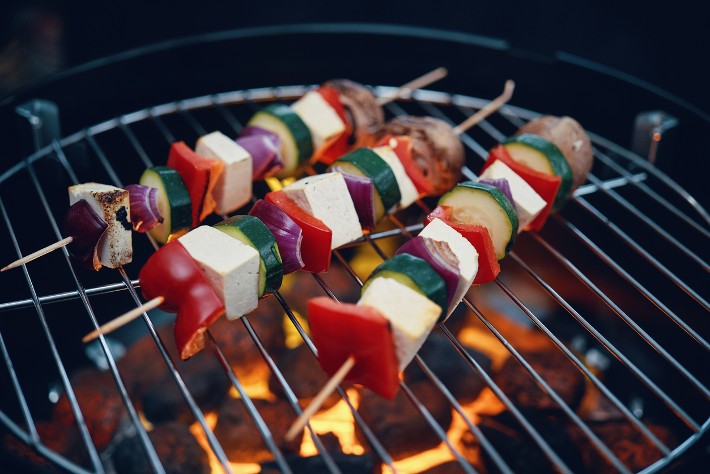