Cook Fresh And Delicious Donuts With The Best Donut Maker

Breakfast should be king size, meaning it should be tasty as well as healthy. However, cooking a delicious meal while maintaining the balance of nutrients regularly seems tough in today’s fast-paced world. Even kids and family members often get bored of eating the same bread and butter or cookies every day. That’s why you need to add delicious delicacies like donuts to your breakfast routine. Now, you may ask, is it good to consume donuts regularly for breakfast? We would say you can have them twice a week, but really that’s up to you. Besides, most people think baking delicious donuts is a challenging task. Thus, we have the finest donut makers in 2023 that makes cooking these delicacies a breeze. These appliances will ensure that you get delicious and perfectly homemade instant donuts every time. You can also effortlessly clean their surface because of the non-stick construction material. 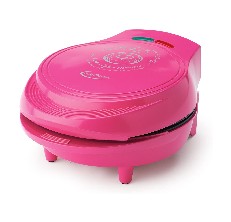 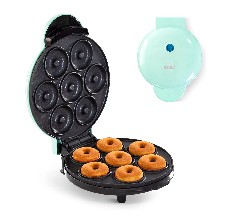 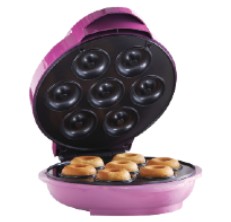 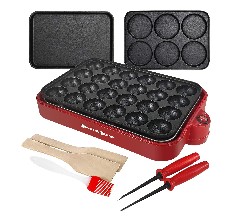 Making perfect donuts without knowing the traditional recipe sounds difficult. That’s why professional chefs recommend using donut makers to cook them perfectly within a few minutes. However, finding an effective and good-quality appliance on the market is nerve-racking. So, we have compiled a detailed buying guide on donut makers that will help you pick up the best product without breaking your bank.

What Are the Advantages of Using Donut Makers?

Here are some fantastic benefits of using donut makers to cook mouth-watering donuts.

How to Pick the Best Donut Maker?

In order to purchase a top-notch donut maker, you should consider the following factors without fail.

The majority of donut makers come with seven mini donut molds. So, if you have a small family or limited donut requirement, you can definitely pick such donut makers. They take a maximum of ten to fifteen minutes to make seven mini donuts in one session. However, if you own a bakery or have a large family and need to make plenty of donuts, then opt for a 24 mold plate donut maker. It can make 24 mini donuts in a period of 15 to 20 minutes. It’s important to examine your requirements and the capacity of the donut maker before investing in it.

The next factor to check while selecting a donut maker is its number of plates. The majority of mini appliances have a single plate or tray with molds to help you make a smaller quantity of donuts. However, you can also find products with multiple different trays, having differently shaped molds to cook various delicacies. All you have to do is set the tray for the food item you are cooking in the appliance. This type of donut maker can also bake pancakes, steak, veggies, omelets, pies, and more aside from donuts.

Since the majority of donut-making appliances function when you plug in their cord to an electrical outlet, it is crucial to check their power capacity. According to our research, most donut makers have the watt unit in the range of 750 to 1000 watts. The higher the watt rating, the faster you prepare donuts, but the power consumed will also be higher.

In order to accurately operate the donut maker, make sure it is bolstered with advanced features like an indicator light. You can also find some products with an LED light that turns on when the appliance is preheated and when the donuts are cooked. So, there will be no chance of burning or overcooking the donuts. Thus, you will get perfectly cooked golden brown delicacies without burning or ruining their flavor.

You should also ensure that the donut maker plate or mold is made from food-safe materials like stainless steel, food-safe plastic, aluminum, and more. Besides, many appliances have PFOA-free and non-stick surfaces so that you can easily demold the donuts once they are cooked. The non-stick surfaces also require less oil or butter to bake the food. Furthermore, you can easily clean such donut makers with a simple tissue or damp cloth. So make sure to check the construction material of the product before making a purchase.

Donut making is an art, and you require many accessories to make perfect cake-shop-style donuts. That’s why many donut maker packages include additional tools like piping bags, spatulas, brushes, and more. If you are the one who likes to serve or consume perfectly decorated and cream-glazed donuts, then make sure to pick such a package.

Make sure to the handle of the donut maker has heat-resistant properties so that it doesn’t heat up when the appliance is functioning. Thus, you would be able to easily open the lid of the hot donut maker without burning your fingers.

How to Cook Donuts in a Donut Maker?

You can cook delicious donuts in a donut maker following these simple steps.

This donut maker bakes the donut instead of frying them so that they have less fat content and are healthy to eat. It has the capacity to prepare seven fresh mini donuts at a time, which is perfect for breakfast or evening snacks. This product functions at 1000 watt power, so the donuts are prepared in a jiffy. Thanks to its non-stick stainless steel mold surface, you can enjoy golden brown and soft donuts at the comfort of your home. You also get a piping bag with a nozzle and separate spatula for perfect decoration and cream layering of the prepared donuts. What’s more, it is backed by a one-year warranty period, assuring you of its high efficiency and durability.

This donut making appliance allows you to make seven mini donuts at once. All you need to do is pour your preferred batter, like cake mix or brownie mix, and switch on the appliance. You can also easily remove the prepared donuts due to the non-stick and PFOA-free surface of this donut maker that does not allow sticking or burning of the donuts. Since it makes fresh donuts within minutes, you can eat a tasty homemade breakfast even during your busy schedule. Moreover, this appliance is bolstered with an indicator light that prevents the food item from overcooking. It also comes with a warranty of one year, so you get the best user experience.

Impress your friends and family by making mouth-watering mini donuts using this advanced appliance. It functions on a powerful 750 watt so that you can enjoy perfectly cooked seven donuts within minutes. It can also be used for making cake, muffins, brownies, and more. Thanks to the non-stick surface, you can easily remove the prepared donuts and clean this appliance with a simple tissue paper. Another plus is that the cool and heat-resistant handle of this appliance allows you to open and close its lid without burning your fingers. It also features an indicator light that lets you know when the appliance is preheated and when the donuts are ready to be removed from the mold. On top of everything, it can fit in a small space of your kitchen due to its non-slip vertical feet and compact design.

Using this multi-function baker appliance, you can cook a variety of delicacies. Its 24-hole plate can be used to bake mini donuts, cake pops, muffins, meatballs, and more. You can also cook burgers, steak veggies, BBQ foods, chicken wings etc., on the grill pan plate that comes with this appliance. Similarly, you can use the six-hole plate for making omelets, pies, and bacon. All these plates are easily interchangeable, so you can set up the appliance as per the food item and cook it effortlessly. You also get cooking tools like a brush for the application of oil, two spatulas, and two pointed pickers to check whether the donut is cooked or not. 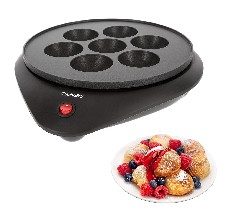 Serve your kids fresh and homemade donuts with the help of this high-quality appliance. It allows you to make seven donuts or mini cakes in a session. You can also make specialized Danish sweet dishes like cake pops, muffins, and ebelskiver. Additionally, it is bolstered with an even heat distributor technology so that the donuts get perfectly cooked without burning. The non-stick surface of this baker plate makes this appliance easy to clean because it doesn’t let the batter stick on it. You can easily wipe it using a damp cloth or tissue after use. It is also easy to operate due to the on/off switch button and an indicator light that turns during the baking process.

Q: Can I open the lid of a donut maker without wearing gloves?

A: Since the handles of the quality donut makers are usually made from heat-resistant material, you can easily open their lid without wearing heat-insulated gloves. However, do not open the lid while the appliance is functioning.

Q: How long does a donut maker take to make donuts?

A: A donut maker having the capacity of baking seven mini donuts in one session usually takes seven to ten minutes. However, if the appliance has a large capacity to cook up to twenty-four donuts, it might take fifteen to twenty minutes per session.

Q: How to clean a donut making appliance?

A: The good-quality donut makers have trays that are built from non-stick materials. They are also easy to clean. All you need to do is use a damp cloth or tissue paper to clean them. Furthermore, never submerge these appliances in the water as they have an installed electric cord which can get damaged in water. 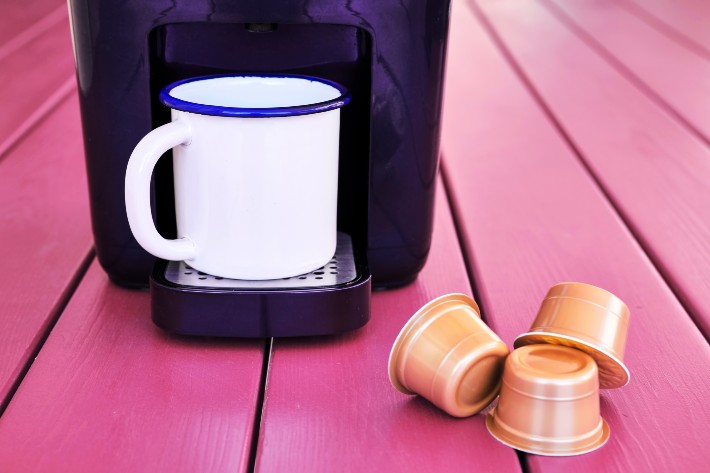 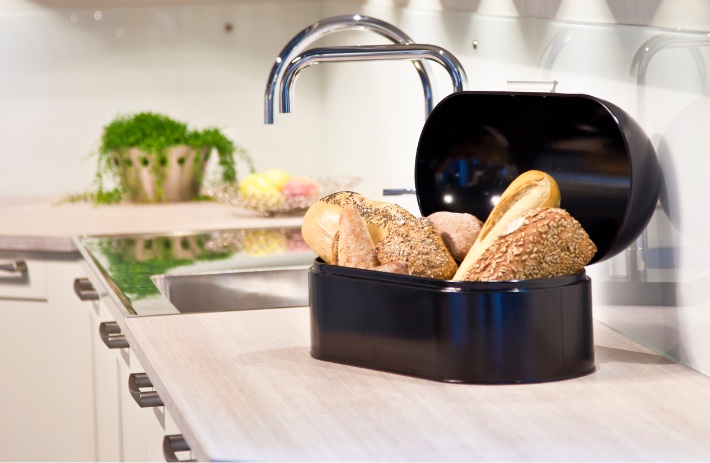