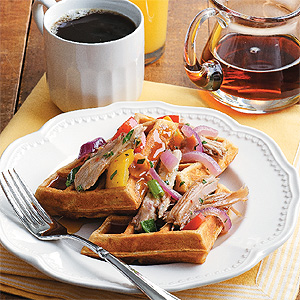 Say goodbye to boring turkey leftovers forever with this flavor-packed main dish. It's so delicious you won’t be able to resist gobbling it up!

FOR THE WAFFLES, WHISK:

IN A SEPARATE BOWL, WHISK:

FOR THE HASH, COOK:

Preheat waffle iron according to manufacturer’s directions. Preheat oven to 300°.

For the waffles, whisk together flour, sugars, baking powder, cinnamon, salt, and nutmeg in a large bowl.

In a separate bowl, whisk together milk, sweet potato, oil, and eggs. Stir flour mixture into sweet potato mixture until combined, some lumps are OK.

For the hash, cook bacon in a large sauté pan over medium-high heat until crisp, about 10 minutes. Transfer bacon to a paper-towel-lined plate; drain all but 2 Tbsp. drippings.

Add onion, bell pepper, thyme, and pepper flakes to drippings in pan and cook until softened, about 5 minutes. Stir in orange juice, scraping up browned bits on bottom of pan; cook until juice is nearly evaporated, about 2 minutes.

Stir in turkey, cream, scallions, maple syrup, and bacon; heat through, then season with black pepper. Garnish hash with parsley and serve on sweet potato waffles drizzled with maple syrup.

Number of servings and amount of cook time will vary based on the shape and size of your waffle iron.

Salmon is available year-round, thanks to farming techniques, so you can enjoy it any time …

There’s nothing more American than canned pork and beans. This recipe takes the classic …

Puttanesca is said to have been named for the spicy “working ladies” of Naples. This …